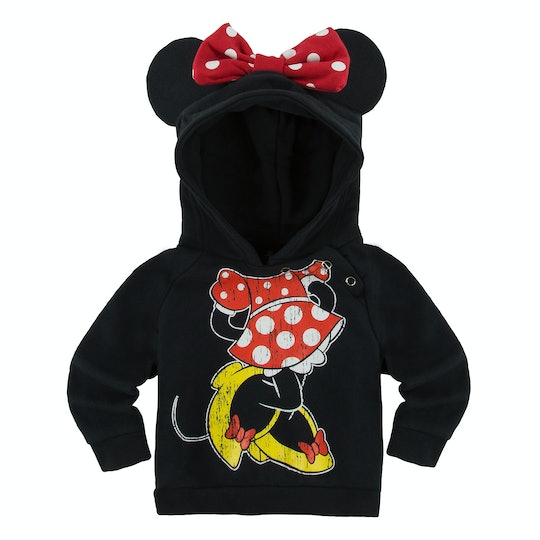 Check Your Kid's Closet For This Recalled Hoodie

Another concerning recall has hit stores — and this time, you'll need to look in your kids' closets to find the culprit. On Wednesday, though no injuries or deaths had been reported, Disney recalled some infant hoodies for a truly scary reason. The company's Mickey and Minnie Mouse hooded sweatshirts may be adorable, but they apparently present a serious choking hazard for the 6- to 24-month-olds wearing them.

The company is offering a full refund to all customers who may have purchased the garments between April and October of 2016, because the snaps at the front of them can apparently fall off, leading to a curious baby potentially putting them in his or her mouth, according to the U.S. Consumer Product Safety Administration. Romper reached out to Disney for comment about the voluntary recall of about 15,000 sweatshirts, but did not immediately hear back.

In the meantime, customers who bought either of the products, which retailed for about $30 each, should contact Disney at 844-722-1444 from 9 a.m. to 5:30 p.m. eastern time Monday through Friday to arrange a full refund of $40. They can also learn more by visiting the Disney Store's official website. The infant hoodies, which sport mouse ears — and, in Minnie's case, a polkadot bow — were sold exclusively at Disney World Resort in Lake Buena Vista, California; Disneyland Resort in Anaheim, California; and on the Shop Disney Parks app.

For those who purchased a sweatshirt of a baby boy or girl while on vacation, it's easy enough to replace the potentially hazardous apparel with something just as delightful. With that $40 refund, they can choose from thousands of gifts, toys, collectibles, costumes, pins, and more by downloading and browsing the Shop Disney Parks app. But if they opt to take a breather from Disney after the recall, there are plenty of other stores and websites that will happily clothe babies and toddlers with the money, as well. Either way, parents, don't sweat it too much — you and your little one are still in luck.