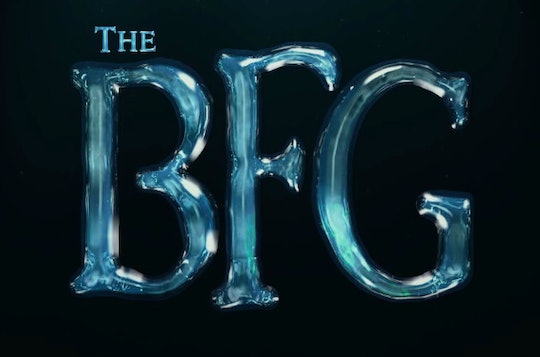 Disney Released The First 'BFG' Trailer, & It's As Amazing As It Should Be

It seems like there are a ton of movies coming out that appeal to audiences nostalgia for childhood (definitely not complaining). And it is safe to say that the latest Roald Dahl adaptation will be the hit of the summer. Disney released the first trailer for The BFG, and the one-minute preview will have you hooked.

Hitting theaters Jul. 22, 2016, the Steven Spielberg-directed movie is based on Dahl’s 1982 children’s book of the same name. Sophie (Ruby Barnhill), and the Queen of England (Penelope Wilton) will team up with the BFG (which stands for Big Friendly Giant) to stop nefarious man-eating giants from destroying the world. And if you never read the book, don't worry about being out of the loop (although you should definitely read it, because it's the best). The trailer does a great job of setting the scene. Also, Mark Rylance is playing the affable giant, and former SNL cast member Bill Hader is cast as one of the main villains, so that should be reason enough to get a ticket this summer.

I mean, from this short preview alone it is clear this movie will be a family favorite. Though it starts out bleak, it quickly picks up, reassuring us that it is not going to be a scare-fest. After all, he's a big friendly giant. The best thing about this preview is it doesn't tell us too much about the movie, giving us just enough mystery but convincing us that we need to see what the BFG is all about. But don’t just take my word for it, take a look at the teaser trailer below and see for yourself:

I'm sure kids and adults alike will be rooting for The BFG.