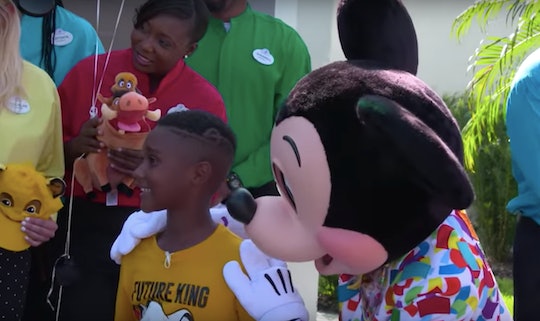 Every once in a while, something happens to remind us that the world is indeed full of great and inspiring people. And, occasionally, that magic happens with a connection to the Happiest Place on Earth — Disney World. On what was otherwise a normal Monday morning, Disney surprised a boy who helped Hurricane Dorian evacuees in a truly magical way.

Six-year-old Jermaine Bell, of Jacksonville, Florida, along with his family, had spent more than a year saving up to take a trip to Disney World for his seventh birthday, according to WTVD. However, when Hurricane Dorian hit last week, Jermaine knew he had to do something else with the money. “I just want to be generous,” he told CNN of his compassionate decision to give the money he had saved to help those in need.

While visiting his grandmother in Allendale, South Carolina, he noticed the lines of cars traveling through town to escape the storm. Seeing that, he decided to use the trip money to buy hot dogs, chips, and water, and he then set up a stand outside his home and donned an apron to hand out food and water to evacuees, according to KTLA. His grandmother said she even saw him praying with a family who were fleeing the storm. “I am very proud,” Aretha Grant, the boy's grandmothers, told CNN. “We knew Jermaine was very special, but we didn’t know he was special in this way to be such a giver like this.”

Jermaine told WTVD that his motto is “live to give,” and that when he saw the travelers passing through, he "just wanted to give people something to eat, so they can get where they are going."

Disney took note of the boy's generous and kind deed, and on Monday morning, during an interview with Good Morning America at Jermaine's home, a bus showed up with balloons, Disney ambassadors, Mickey Mouse, and some pretty big news for him.

"As a gift to you, we want you to come and enjoy a getaway at the Walt Disney World Resort later this month,” Marilyn West, a Disney World ambassador said.

“When I saw everything that was there, I was just super happy,” Jermaine told Good Morning America. "[I'm] really excited, because I wanted to go to Disney a long time."

Disney, of course, has a history of surprising deserving people with trips through organizations like the Make-a-Wish Foundation. But in 2012, the company did something similar to what they did today when they surprised a 9-year-old boy with an all-expense paid vacation. Brendan Haas spent three months trading things on Facebook until he traded his way up to a trip to Disney World, according to ABC News, but he ultimately gave the trip to a family whose father had been killed in Afghanistan. When Disney learned of his generosity, the company rewarded him with a trip of his own, which he promptly gave away to another fallen soldier’s family, according to Business Insider.

Jermaine will be visiting the park later this month when he’s on a break from school, according to CNN. And as for this kind boy's words of wisdom? "Be strong, and if you do good things, you will be rewarded,” he told the news outlet. Jermaine's kindness, thoughtfulness, and generosity is inspiring and serves a wonderful reminder of the good that exists in the midst of difficult times.