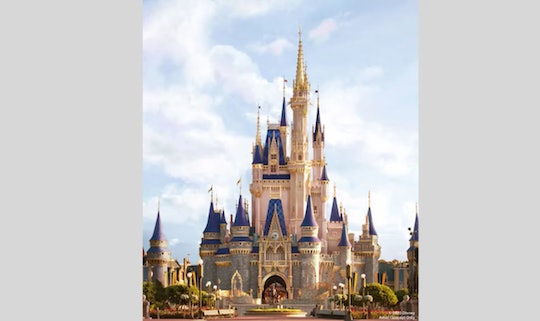 In honor of the 70th anniversary of Disney's animated classic Cinderella, Disney World's Cinderella Castle is getting a major makeover. The vice president of Disney's Magic Kingdom Park announced the news earlier this week in a blog post that has some future guests worried about how the iconic landmark's renovation might impact their visit, while others are excited to see what's in store. Either way, here's what we know so far about the Cinderella Castle's upcoming transformation.

"Cinderella first transformed into a princess 70 years ago this week when the animated classic was released — and ever since, her courage and kindness have been inspiring guests and cast members alike," Jason Kirk, the vice president of Disney's Magic Kingdom Park, announced Monday in a post on the Disney Parks Blog. "We are excited to share that her story has inspired a bold, shimmering and royal makeover of her namesake castle at the heart of Walt Disney World Resort."

In a concept image Kirk shared, the "newly-enhanced" Cinderella Castle can be seen with a fresh shade of grey paint along the castle's walls, a slightly pink-hued color for the main castle, a dark regal blue on the rooftops and turrets, and more gold accents than the castle has now. To be fair, the concept image isn't too far off from what the Cinderella castle looks like currently.

That being said, many were concerned to hear that the park's iconic landmark would be getting a makeover. "Cinderella's castle has always been magnificent, majestic and glorious in her stunning simplicity," one person commented on the Disney Parks Blog. "Dressed like this, she has lost her serenity, elegance and grace… she now looks more akin to her gaudy sisters!"

Another called the planned makeover "devastating" for those who view Disney World as their "happy place." Others complained on both the blog and Twitter that the planned construction and renovation would put a damper on their upcoming trips to the park. "Aw man, my daughters [sic] first trip is in May," one Twitter user wrote. "Do this stuff in the off season!"

Still, some Disney fans were excited to hear about the plans. "A very much needed upgrade, and it looks great!" one person wrote on Twitter, while another said, "Even more beautiful! Love the new gold details."

For the moment, Disney is keeping mum on the exact dates for the castle's refurbishment. Romper has reached out to Disney for more information but did not receive an immediate response. In replies to concerned commentators, Kirk said work was "expected to begin in the coming weeks and be completed before the end of summer." Kirk also acknowledged the castle's iconic status and vowed that the park would do all it could to ensure park guests are still able to enjoy and photograph the castle during its makeover. "While temporary construction equipment may be present while Cinderella Castle receives its royal makeover, it will remain uncovered and we will do our best to ensure guests are still able to capture special photos and memories in this iconic spot," Kirk wrote.

He also noted that guests would continue to be able to enjoy the live stage show Mickey's Royal Friendship Faire and the Happily Ever After fireworks that take place at the castle. Cinderella's Royal Table and the Bibbidi Bobbidi Boutique will also remain open inside the castle, according to Kirk.

While Disney's upcoming Cinderella Castle makeover has proved a tad bit controversial, it isn't the first time Disney has revamped the landmark. In the fall of 1996, for example, the castle was temporarily transformed into a very pink birthday cake for Walt Disney World Resort's 25th anniversary. However, while the cake castle lasted only a few years, it remains unclear if Disney's upcoming Cinderella Castle makeover will be more permanent.