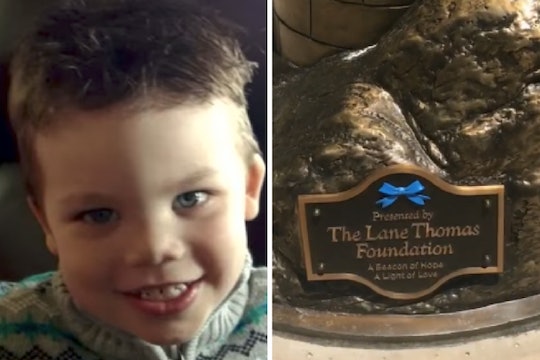 Disney World Installed A Memorial For Lane Graves, & It's So Touching

According to the Tampa Bay Times, Disney World has installed a statue in honor of Lane Thomas Graves, the 2-year-old boy killed by an alligator while playing near a lagoon at a Disney resort in June 2016. And it sounds like it's a really lovely tribute. According to the Times, the statue is of a lighthouse, and it's meant to act as a symbol of the Lane Thomas Foundation — a charitable fund created by the boy's parents after his death that helps financially support families with kids who need organ transplants.

The New York Daily News reported that the 2-year-old Nebraska boy was staying at Disney’s Grand Floridian resort with his family in the summer of 2016 when he was attacked while playing near the Seven Seas Lagoon. And despite the best efforts of his father, Matt Graves, to save him, he died at the resort in the horrifying incident that shocked the world. Now, a gold and blue statue, marked with two stars, has been placed near where the tragedy occurred, according to The Orlando Sentinel. The statue reportedly reads: "Presented to the Lane Graves Foundation. A beacon of hope. A light of love."

Disney was criticized in the weeks following the attack for not taking more precautions when it came to alligators in the water near it's resorts. According to CBS News, Graves was the first alligator fatality in Disney World's 45-year history, and what happened to Graves is incredibly tragic.

Since the attack, Disney World has added extra safety measures like alligator warning signs and a barrier around the lagoon where Graves died, according to The Tampa Bay Times. These precautions are in line with the measures that the company previously stated would be implemented after the attack. In a statement released to PEOPLE in June 2016, Disney said:

We are installing signage and temporary barriers at our resort beach locations and are working on permanent, long-term solutions at our beaches. We continue to evaluate processes and procedures for our entire property, and, as part of this, we are reinforcing training with our cast for reporting sightings and interactions with wildlife and are expanding our communication to guests on this topic.

In addition to those safety measures, the company has now moved ahead with installing a memorial to Graves on the Grand Floridian Resort property as well. And it sounds like it's very much appreciated by the family he left behind. In a statement reported by CNN, Graves parents, Matt and Melissa Graves, said:

We find comfort that so many people continue to remember our sweet boy, Lane, and we believe the lighthouse stands as a beacon of hope and support for families in the depths of despair.

According to an article in The Orlando Sentinel in June, George A. Kalogridis, the president of Walt Disney World Resort, said the statue was in fact meant to be a symbol of hope. According to that publication, Kalogridis said:

To provide continued awareness of the foundation and its mission, we’ve commissioned an original sculpture of the lighthouse the foundation uses as a symbol of love and hope, to be installed on our property this summer.

And now the company has delivered. The exact location of the memorial statue is a little unclear, although an article by Laughing Place about the statue for Lane Graves includes a map pointing out where it seems to be.

Hopefully, the additional warning signs installed in the wake of Graves' death draw just as much attention as the beautiful new statue that acts as both a tragic reminder of why Graves is gone, and a lovely memorial to the incredible little life that he lived.