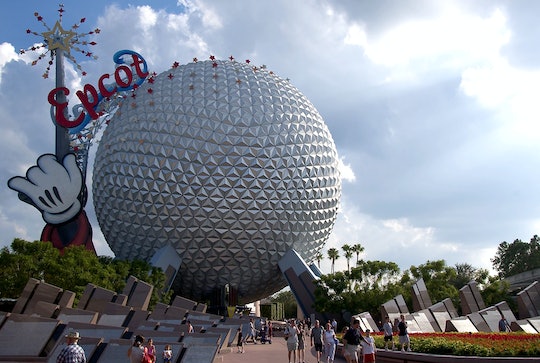 If you haven't visited Florida's Epcot Center yet, there's a great reason to start planning your trip ASAP. Why you ask? Look no further than Disney World's new Epcot food crawl, which offers families the opportunity to try lots and lots of cheese. Spoiler alert: There's a good chance you'll already have packed your bags by the time I've filled you in all of the delicious details.

When I mentioned cheesy goodness earlier, I wasn't kidding. Having kicked off on Aug. 29, the food crawl (which is apart of Epcot's 24th annual International Food & Wine Festival) will focus on a long list of fabulous cheeses, like Raclette from Switzerland, old-fashioned cheesecake, and Brazilian-style cheese bread, to name a few tasty options.

But wait — that's not all. Some of the other dishes you'll be able to sample at the event, which runs through Nov. 23 at Epcot, include warm, Swiss-style Fromage, served with baby potatoes, cornichons, and a baguette, according to Disney Park's Blog. There's also an incredible Impossible Cottage Pie, a vegetarian delight featuring "Impossible ground meat mixed with carrots, mushrooms, and peas, topped with mashed cauliflower, white beans, and mozzarella," according to Inside The Magic.

What's especially great about this year's festival, besides the cheese? This year's event will be Epcot's longest-running festival ever. Yep, cheese is just that popular.

As it turns out, the event — dubbed "Emile's Fromage Montage — was named in honor of Emile the rat from the hit film, Ratatouille. So you have this incredible film to thank for all of this gooey goodness.

There will be at least five around-the-world cheese dishes being prepared at the park each day as part of the festivities, according to Delish. And those who try every dish will have their Epcot "passport" stamped as such, with the reward being a free cheesecake. Special "cheese seminars" will also educate serious foodies on the art and craft of creating delectable dishes.

For the vegan or dairy-free folk among us, there will still be plenty to do at the event: In fact, Walt Disney World's website has a roster full of dairy-free food happenings for the festival. From celebrity chefs like Cat Cora on hand to candy sushi-making, there are many different options for all park goers.

Once you're finished with all of the eating, you can participate in various activities to fight off the inevitable food coma, like a dance party.

Coming from across the country, I clearly timed my family's visit to Disney World wrong when we went a few years back. If I could have sampled gourmet cheeses from around the world instead of corndogs (which were not very memorable), the visit would have been even more fun, for the kids and parents. I guess the idea of making things for the grown-ups is also behind the "wine" part of this event, which I also sadly missed.

On top off all of the rides and attractions Disney has to offer, Epcot's cheese-inspired food crawl is the icing on the cake. I say, if you plan on going to Disney World this fall, make sure you book enough time to participate in this delicious event. Happy cheesing, folks.