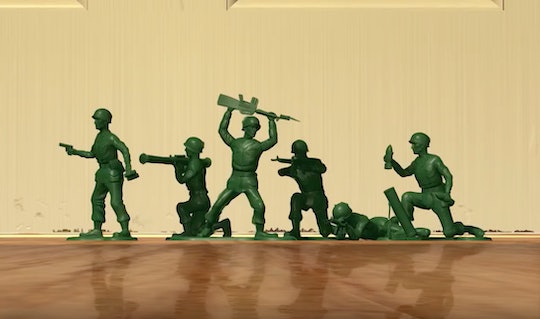 Disney World's Toy Story Land Will Include Green Army Women, Too, & Kids Will *Love* It

After lightyears of anticipation, Toy Story Land is finally opening this weekend. The land, which is part of Disney's Hollywood Studios at Walt Disney World in Orlando, Florida, is filled with plenty of exciting rides, games, food, and characters — but the newest update about the park is the best yet. While Toy Story and Disney World may only feature Green Army Men, Toy Story Land will also include Green Army Women, and it's awesome news for kids.

Tom Vazzana, the show director of live entertainment for Toy Story Land, told People, "This is important to all of us — it’s the right thing." In Toy Story, all the Green Army Men are, in fact, men. But Disney's choice to finally (23 years after Toy Story came out) incorporate Green Army Women is definitely a good move. It will show children that women can be in the Army, too, hopefully inspiring young girls to believe that anything is possible, and educating young boys that girls can do anything boys can do.

As you may recall from the movie (or from your childhood), Green Army Men are about two inches tall. But Disney has made them life-sized... or, Disney has made its customers toy-sized. According to a press release on Disney's website, Toy Story Land will "transport guests into the adventurous outdoors of Andy’s backyard where they will feel like they have shrunk to the size of a toy."

Interestingly, Walt Disney World patrons can already meet Green Army Men at the parks, at Pixar Place in Hollywood Studios, according to the blog Couponing to Disney. But in Pixar Place, not only are all the Army Men men, but they also all wear green mesh mask that cover their faces and bar them from speaking with patrons. At Toy Story Land, their faces will be covered in green makeup instead (Elphaba style), allowing them to move their faces and chat with patrons.

“Now everyone’s able to talk and interact,” Vazzana told People. “They’re not hidden away in rooms." He said Woody, Buzz, and Jessie will also be roaming around the parks. “They’re alive. I’m thrilled about that accessibility.”

And Disney is taking that interaction to the next level with a boot camp, which patrons can participate in alongside the Green Army soldiers. Vazzana told People:

We set up a boot camp ... We invite anyone who wants to play with us to become a Green Army soldier. They take an oath and have a series of really funny exercises.

In addition to the Green Army soldiers, Toy Story Land is filled with Easter eggs. For example, instead of typical park benches, the benches are big Lincoln Logs; instead of typical lamps, the park is lit with Tinkertoy-shaped lamp posts and oversized Christmas lights; and to honor Andy, the park has his 25-foot footprint to highlight the fact that all the patrons have been "shrunk" down to toy size, the New York Times reported. Kathy Mangum, a regional executive for Walt Disney Imagineering, told the newspaper:

It's about time that the Toy Story universe made some room for Green Army Women. And who knows — perhaps Toy Story 4's creators will take the hint and add a few to the upcoming movie.