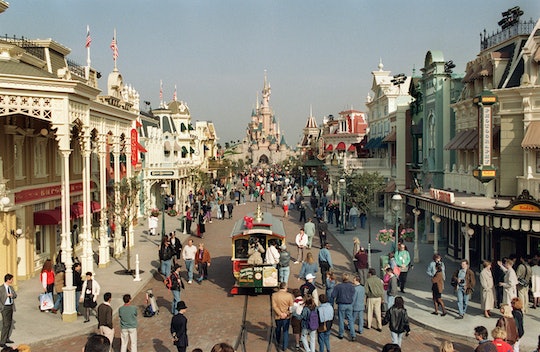 While society has come a long way in understanding that gender is a social construct and little kids (and adults) should be able to dress however they want, that doesn't mean the world always gets it right. And now, Disneyland has apologized after a 3-year-old boy was banned from its "Princess for a Day" event at the Disneyland Paris park.

Hayley McLean-Glass, and her son, 3-year-old Noah, were both saddened when they reportedly received an initial response from the park in France about Noah's possible attendance at the "Princess for a Day" event.

Update as of 6:20 p.m. EST Disney has responded to Romper's request for a comment with the following statement from a Disney spokesperson: "This experience is available to all children ages 3-12 and we've reached out to the family to apologize for them being provided with inaccurate information."

According to her blog, McLean-Glass reached out to the park about the possibility of booking "the experience as a Christmas gift" for Noah. However, she was "very sad and disappointed," at the response she received. According to McLean-Glass's blog, Disneyland Paris replied by telling her that "it is not possible to book Princess for a Day for a boy," and then offering a custom, private option for Noah at 300 euros (roughly $357). Understandably, McLean-Glass was distraught, and took to her blog to express her concern at the park’s decision.

Now, though, Disneyland has issued a statement to NBC News' British partner, ITV News, saying they wanted to apologize for what had happened.

According to NBC News, the park’s full statement is as follows:

An isolated incident, the cast member’s response is not reflective of any policy or belief held here at Disneyland Paris. We are going to ensure this does not happen again. Of course, both boys and girls are welcome to enjoy The Princess For a Day experience in addition to all our other special activities.

However, before the park responded with their statement, McLean-Glass couldn’t help but wonder why boys weren’t allowed to dress up as princesses. “If a little girl wants to be a super hero, she can be,” she wrote on her blog, continuing, “She can be whatever she wants...just like Walt Disney himself said, "If you can dream it you can do it!"..Unless you're a little boy who wants a Princess experience at Disneyland apparently.”

Obviously, it’s important that no child feel they are doing something wrong merely by expressing themselves, especially when all they want to do is dress up as one of their favorite Disney characters. Fortunately, Disneyland has apologized for the incident and Noah will hopefully be able to attend the event. Because seriously, being “Princess for a Day” sounds pretty amazing, and this little boy clearly deserves to experience it.