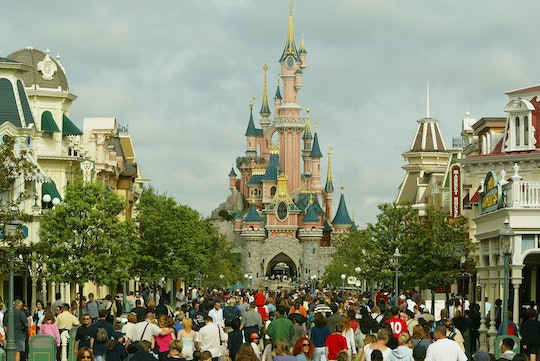 Recently Visited Disneyland? Health Officials Say You May Have Been Exposed To Measles

If you've recently taken a trip to the "happiest place on Earth," health officials are warning people who've visited Disneyland that they might've been exposed to the measles, according to an exposure advisory issued Tuesday by the Los Angeles County Department of Public Health. With more than 51,000 visitors said to enter Disneyland each day, this exposure could potentially have widespread ramifications for thousands of families.

An individual confirmed to have the measles was reported to have visited Disneyland in Anaheim, California, while infectious on Oct. 16, according to the Los Angeles County Department of Public Health. The guest in question was reportedly inside the park from roughly 9:15 a.m. to 8:35 p.m on that day. Additionally, the individual also reportedly visited a Starbucks on Sepulveda Boulevard at around 7:50 a.m. on Oct. 16. Romper has reached out to both Disneyland and Starbucks for comment on the health advisory, but did not receive an immediate response.

"Anyone who may have been at these locations on these dates during these timeframes may be at risk of developing measles for up to 21 days after being exposed," the Los Angeles County Department of Public Health noted in its advisory.

The health department advised anyone who visited either Disneyland or the Sepulveda Boulevard Starbucks on Oct. 16 to review their immunization records to confirm whether or not they have been vaccinated against the measles.

Those who have not been vaccinated and have not previously contracted the measles virus should monitor themselves for symptoms for up to 21 days after exposure and are urged to reach out to a health care provider about receiving the MMR vaccine. The Los Angeles County Department of Public Health also urged anyone who is pregnant, an infant, or has a weakened immune system to immediately notify their health care provider about their possible exposure to measles.

And for those who haven't been vaccinated, the measles is highly contagious, according to the Mayo Clinic, which notes the disease can be spread through coughing, sneezing, and even just talking. "When someone with measles coughs, sneezes or talks, infected droplets spray into the air, where other people can inhale them," the Mayo Clinic states. "The infected droplets may also land on a surface, where they remain active and contagious for several hours."

That means you don't necessarily have to come face-to-face with someone who is infected in order to contract the measles. Simply touching a surface or item that an infected person touched, coughed, sneezed, or spit on hours before could result in contracting the illness, according to the Mayo Clinic.

While the measles is both treatable and preventable, the Centers for Disease Control and Prevention (CDC) has said it shouldn't be thought of as "just a little rash." Rather, the CDC has noted that the "measles can be dangerous, especially for babies and young children." For children and adults, symptoms typically appear within seven to 14 days after infection and can begin with a cough, runny nose, red and watery eyes, and a high fever, according to the CDC.

A rash comprised of flat red spots will then develop on the body a few days after these initial symptoms have shown themselves, the CDC has reported. Often the rash will appear first on the face around the hairline and then spread down the neck to an individual's chest, back, arms, legs, and feet.

Despite its ability to be prevented by vaccine, the CDC has recently reported seeing the greatest number of confirmed measles cases in the United States since 1992 with 1,250 confirmed cases of measles reported from Jan. 1 to Oct. 3. The health agency has noted that a "majority" of those cases occurred in unvaccinated individuals.

For now, however, it remains unclear if any other Disneyland guests have since come down with the measles.