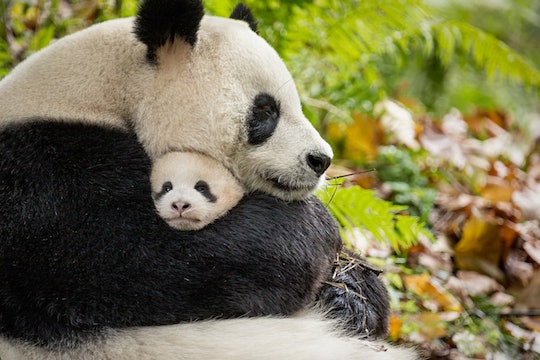 At first glance, your life and the life of a mother snow leopard's may seem completely different. While you may be grocery shopping, she is stalking, attacking, and carrying a mountain goat to her den, just to make sure she and her cubs have food for the next couple of weeks. With that said, you're both caring for your children. You'd both, presumably, do anything for them. So, when watching Born in China — Disney's new nature film that follows families of China's most unique animal inhabitants — the line between human and animal families becomes unexpectedly blurred.

In the 70 plus minutes the film spans, the lives of pandas, snow leopards, and golden monkeys are developed through a lens of uninterrupted highs and lows. Like many families, these animals are dealing with single parenthood, fending for their children, dealing with rebel children, and learning what it means to have a loved one leave home for good. Sound familiar?

Lu Chuan, the director of the film, credits the animals for the compelling narratives the film follows, telling Romper that the animals "give you the story," instead of the filmmakers trying to create a plot themselves. "Our job is to look through the materials and find the most powerful story, inside the 500 hours of footage," Chuan says.

Despite years of filming and over hundreds of hours of film on hand, the movie is neatly presented in 76 minutes of story. It's three families, all with young offspring, surviving in an environment that has been relatively untouched for over 60 years.

"We've been on every continent," Conli says, "but we have never really been to China... We were some of the first western crews out there in this region." Conli believes that Westerners are not as familiar with the natural setting of China, outside of the metropolises of Beijing and Shanghai, so the film is a glimpse into a landscape that is new to many viewers.

One of the most compelling relationships portrayed is the one between Dawa, a snow leopard mother, and her two cubs, who she's caring for on the Tibetan Plateau. She faces trials throughout the film: feeding her children, teaching them to care for themselves, protecting them from intruders, but her tenacity in caring for them is at once profoundly moving and deeply familiar.

"You can see these animals are having a relationship amongst themselves," Conli says. "And they're sentient, they are compassionate, and incredibly passionate about their children."

Despite the obvious differences, the theme of family and parenthood in Disney's Born in China rings true for any human in the audience. It is shocking, at times, to see moments that feel so relatable, but it will make viewers feel connected to other parents in a way that transcends species and suggests that we are all part of something much larger than ourselves.