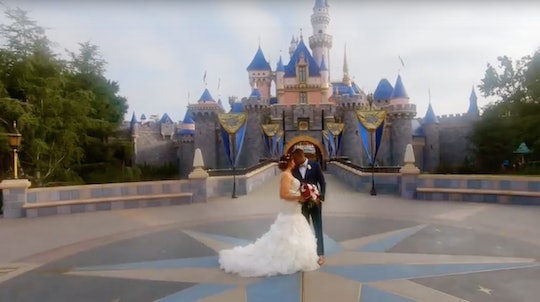 I, For One, Will Celebrate Valentine's Day By Watching 'Disney’s Fairy Tale Weddings'

Forget going to dinner in crowded restaurants, chocolate hearts, and mushy cards; I have your Valentine's Day plans right here, people. Disney's Fairy Tale Weddings returns for a brand new season on Disney+ on Feb. 14. The new season will introduce viewers to new couples, treat them to surprise musical performances, feature unexpected appearances and captivating celebrations — all steeped in that signature Disney magic.

The new season of this beloved series is the perfect way to spend the most romantic day of the year. Each episode will showcase an enchanting story at Disney destinations around the globe. See hidden camera engagements then follow the happy couples as they live out their intricate plans and tie the knot at the happiest place on Earth with the help of Disney’s Fairy Tale Weddings & Honeymoons.

The show's first season is currently streaming exclusively on Disney+, offering viewers a chance to marathon-watch the show on the days leading up to V-Day as well. Hosted by real-life couple Stephen “tWitch” Boss of The Ellen DeGeneres Show and Dancing With The Stars' Allison Holker, the show is sure to give you all the warm and fuzzy feelings that this time of year calls for.

The show began in 2017, taking viewers into the magical world of wondrous weddings planned and executed on Disney properties. Disney released a trailer for the new season to YouTube and it looks like the latest nuptials are set to be even more magical — if that's possible. Princess proposals and carriage rides are just the beginning.

This level of luxury is simply not attainable for the average couple, but Disney's Fairy Tale Weddings gives everyone the chance to join in on the fun. So snuggle up, grab those conversation hearts you know you have sitting around, and settle in for a brand new season of romantic Disney bliss.