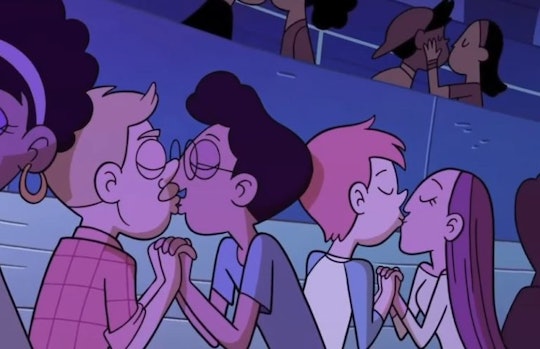 The Disney cartoon Star vs. the Forces of Evil just unexpectedly made history when it comes to LGBT+ representation in animation series geared towards kids. Despite how far many others genres have come in terms of representation, animated shows for children have always lagged behind, keeping things implied or veiled. However, Star took a major step when the show featured not one, not two, but four (or five? It's honestly hard to count.) same-sex kisses in a recent episode, and did so without any fanfare. Disney's first animated same-sex kiss was a big deal, especially because of the way it was handled.

The show follows a magical princess named Star Butterfly living on Earth with her best friend Marco Diaz. In the episode in question, Season 2's "Just Friends," Star and Marco are attending a boy band concert – an obvious rite of passage for all tweens – and enjoying themselves to a particularly romantic song. The song has such an effect on the audience that it starts off a waterfall of smooches. All kinds of couples are depicted in the moment, including four same sex couples: two that are two men, and another two that are two women. And there could be more – it's like a Where's Waldo of kisses. The best part is that none of the kisses treated differently: the couples are just a few out of many who are enjoying themselves on a night out.

While the first kiss is focused in the center of the shot as Star's gaze pans over the audience, the rest are simply moments in the crowd that you might not even notice at first glance. That's part of what makes it notable: all of the couples kissing in the audience are on a level playing field whether they're gay or straight. They're all equal.

Star vs. the Forces of Evil is not the first animated show to feature LGBT+ relationships and characters, though they are the first to feature a kiss (or four). The cartoon Gravity Falls confirmed two male characters were a couple (albeit in the series finale) after fans had assumed as much for years, and Disney's live-action series Good Luck Charlie featured a character with same-sex parents. Star continues that trend towards greater progressiveness by not singling its same-sex characters out. Instead the show lets them be what they are: just like everybody else.

The progress may be slow, but every little bit helps – and Star's equal treatment of its background couples is one more step. Hopefully the next step will take things even farther.