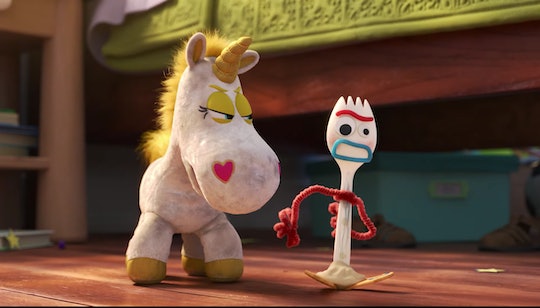 Fans of Toy Story 4 will be happy to hear that Forky, the beloved toy crafted from a spork, pipe cleaners, and a pair of googly eyes, is back. This time, however, Forky isn't headed for the big screen; the crafted toy is instead set to star in a series of film shorts entitled Forky Asks A Question on Disney's streaming service, Disney+.

In promos for the upcoming shorts, both Pixar and Disney have promised that Forky Asks A Question will see "all of life's greatest questions — answered. Sort of." But while Forky likely won't be tackling the meaning of life, fans of the spork can expect to see them pose hard-hitting questions like: What is a friend? What is art? What is time? And, perhaps most important of all, what is cheese?

Thankfully, Forky doesn't have to complete this quest for answers alone. According to a trailer shared recently by both Pixar and Disney, Forky will be aided by other Toy Story characters including, a unicorn plush named Buttercup, a talking plastic pig-shaped piggy bank named Hamm, a lederhosen wearing hedgehog named Mr. Pricklepants, a toy clock named Old Timer, a green plastic Tyrannosaurus named Rex, and an internet-savvy Triceratops named Trixie.

Plans for Forky Asks A Question were first announced earlier this year during promotional interviews for Toy Story 4. Actor Tony Hale, who voices Forky, then confirmed to Business Insider in mid-June that all 10 episodes of the short film series had already been recorded and he was excited to see fans' reactions. "What I'm crazy about with Forky is he doesn't have any shame," Hale told Business Insider. "He just needs to know, 'What does this mean?' There's no embarrassment."

Hale went on to tell Business Insider that even he'd learned something new thanks to Forky's incessant questioning. "It plays into him wanting specific things explained that maybe people are embarrassed to ask but they want to know," Hale told the news outlet. "Some of the things I didn't know about."

Produced by Pixar Animation Studios, Forky Asks A Question was written and directed by Bob Peterson, the Academy Award-nominated screenwriter and director behind Finding Nemo and Up. It was produced by Mark Nielson, who also produced Toy Story 4 and Cars. And although it's unclear from the trailer how long or involved any of the 10 short films included in Forky Asks A Question will be, those already slated to get Disney+ may find it to be a fun bonus to the movies and shows already set to be part of the streaming service's debut content.

What's more, Forky Asks A Question won't be the only Pixar creation available on the new Disney+. According to CNET, the streaming service's library will include six Pixar shorts when it launches next month. Known as Spark Shorts, these Pixar shorts will include Loop, Wind, Smash and Grab, Kitbull, Purl, and Float, according to a recent Disney+ Twitter announcement. A preview giving viewers a brief glimpse into all six of those Spark Shorts was recently released on YouTube.

Forky Asks A Question is scheduled to premiere when Disney+ launches on Nov. 12. Currently the streaming service goes for $6.99 a month or $69.99 a year.