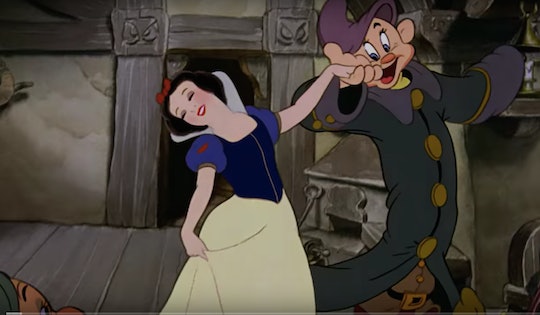 After much anticipation, the day has finally come. A massive Twitter thread containing the list of movies and shows on Disney+ took the internet by storm on Monday morning, and for good reason. The catalogue of content on the new steaming service is likely to have something for everyone.

Disney+ shared the lengthy list of films and TV shows in a series of tweets, organized by release date, according to Entertainment Weekly. The new streaming service will contain not only Walt Disney animated classics, but also the numerous Star Wars films, Disney Channel Original Movies, Marvel Studios movies, and even more content from Fox and Lucasfilm.

The tweets began with an announcement reading, "It. Is. Time. From Snow White and the Seven Dwarfs to The Mandalorian, check out basically everything coming to #DisneyPlus in the U.S. on November 12." From there, the content was announced, beginning with 1937’s Snow White and the Seven Dwarfs (1937), followed by Pinocchio, Swiss Family Robinson, and Fantasia — all of which came out in 1940.

The 1941 films available for viewing on Disney+ include The Reluctant Dragon and Dumbo; followed by Bambi (1942), Saludos Amigos (1943), and on through the years from there.

While Disney+ has promised a comprehensive collection of Marvel movies, the only ones that were announced in Monday's thread were Iron Man, Iron Man 3, Thor: The Dark World, Avengers: Age of Ultron, Guardians of the Galaxy, Ant-Man, and Captain Marvel. However, as Inverse explained, it is possible that other titles are still contractually obligated to play on Netflix until their deals "expire."

What's more, '90s babies can rejoice over the nostalgia available for streaming, including Boy Meets World and Disney Channel Original Movies, there’s The Thirteenth Year and Cadet Kelly, according to The Verge. Along with these terrific throwbacks, the thread also teased some exciting Disney+ originals. Among new content, Anna Kendrick’s Noelle and the live-action Lady and the Tramp stood out.

If that's not enough for you, the thread promised in a final tweet that “The announcements aren’t even over yet… Stay tuned for more soon!” You can see a full list of the announced shows and movies on the original Disney+ Twitter thread or watch the 3-hour-long video recap that the streaming service also released on YouTube.

Disney+ is currently available for pre-order in the United States, meaning that registered viewers can start streaming when the service goes live next month. Subscriptions are available both monthly and yearly for $6.99 and $69.99, respectively, with a seven-day free trial beginning Nov. 12. A package deal is also available, with Disney+, sports streaming service ESPN+, and the Hulu option with ads for $12.99 per month, according to Vox.

No matter what you love to watch from under the Disney umbrella, Disney+ is going to be your one stop shop for it all. And if the 500+ tweets on Monday didn't include what you're looking for, more is coming.