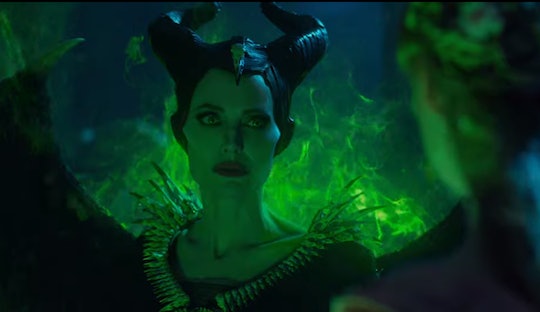 This New Trailer For 'Maleficent: Mistress Of Evil' Will Give You Goosebumps

The battle for true love is coming back to big screens this fall. Disney’s Maleficent: Mistress of Evil official trailer just dropped on Monday, July 8, and it shows family and in-laws fighting over a planned wedding in true fairy-tale style, complete with armies and air battles.

In the two-minute trailer for the film — slated for release on Oct. 18, 2019 — Princess Aurora agrees to wed Prince Phillip and the happy couple break the news to their families. Godmother Maleficent, again played with *those cheekbones* by Angelina Jolie, instantly puts her foot down hard. “Love doesn’t always end well,” she tells Aurora in the trailer.

But she still agrees to meet with the mother-in-law, Queen Ingrith, played by a regal Michelle Pfeiffer, who throws down the absolute worst insult a foster mother could ever hear. “You have done an admirable job going against your own nature to raise this child,” Ingrith says. “But now, she will finally get the love of a real mother.” Yikes.

But there may be more at stake here than just Maleficent’s own mother-complex. At the end of the trailer, we get a hint that there is a whole other world we’re about to learn about and it’s full of Maleficent-like creatures. “You’ve spent years caring for a human. Now it’s time to care for your own,” says Chiwetal Ejiofor, sporting the same wings and horns as Jolie.

The film is actually coming out nearly six months before its original planned date in May 2020, according to People. Throughout filming we've only been offered brief glimpses into the action, provided by star Elle Fanning on her Instagram account. One hump-day, for instance, she posted a photo of herself in costume with her lips being blown back by a fan. "Happy Winds-day" she captioned it.

She also put up a snap of herself being photobombed by Jolie in her horns, and another showing Jolie in sunglasses and a bathrobe. "It's bring your mom to work day on the #Maleficent2 set!!!!!" she captioned that one.

Even though The Lion King live-action remake is one of the most-anticipated movies of the year, and Disney also dropped a trailer for an upcoming Mulan just yesterday, Forbes called Maleficent: Mistress of Evil the most important film for Disney in 2019. The reason? It could justify sequels for the live-action track they seem to be on. "They are already 0/1 in that regard. Alice Through the Looking Glass earned just $299 million in May of 2016, or just 29% of Alice in Wonderland's $1.025 billion global gross six years earlier," Forbes noted.

From the look of this trailer, this might just do the job. It's packed with color, action, and intrigue, and even offers a glimpse at a sequel of its own surrounding the new fairy kingdom.