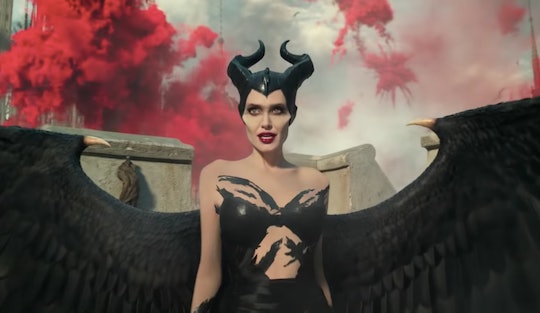 OK, This New Trailer For 'Maleficent: Mistress Of Evil' Will Make You Say "Whoa"

Disney fans have been waiting for more than a year for Maleficent to return to the big screen, but we now have the first official teaser and a release date for the sequel. Indeed, Disney's Maleficent: Mistress of Evil trailer shows Angelina Jolie finally reprising her epic role — and it also revealed that the movie will be in theaters come this October.

Disney released the first trailer for the movie this week, along with the official synopsis. "[It] is a fantasy adventure that picks up several years after Maleficent, in which audiences learned of the events that hardened the heart of Disney's most notorious villain and drove her to curse a baby Princess Aurora," the network shared, according to DigitalSpy.

The synopsis went on to say that the second film will explore the "complex relationship" between Maleficent and the new Queen, as they form different "alliances" and face new adversaries as the moors and the magical creatures within them are threatened by new, opposing forces.

The teaser itself was vague, and left a lot of room for mystery (as any good teaser does) but did make it clear that Maleficent is back, and her former alliance with Queen Ingrith is, at minimum, on the rocks.

At one point, Maleficent visits her on her throne, telling her something regarding how she is going to prey upon the innocent. Ingrith then says, "If I didn't know better, I would say that is a threat." To which Maleficent replies, "Well do you?" Ingrith replies, "Do I what?" Maleficent answers, "Know better?"

It seems to be setting the stage for what transpires later in the clip, which is some sort of battle between their forces, through which Aurora is undoubtedly involved.

In an interview with BuzzFeed News, Jolie previously shared why she thought the ending of the first movie was so profound, and it could offer insight into what's ahead for the next one. (Spoilers ahead.)

For those who aren't familiar, Maleficent ends with Jolie's kiss breaking the spell upon Aurora. Traditionally, it was only a "true love's kiss" who could break that spell, and Jolie says that Maleficent expressing that kind of love was a breakthrough moment for her as a character.

"It's all about the very question of what love is. And even if you don't have children, you still have parents, so you know that this kind of love is the truest form," she said, continuing:

What also works is that true love's kiss came from the person who really didn't believe she was capable of any kind of goodness or love — that she would in any way be loved or have love is something she'd long ago dismissed from her life. So the thing is not only that she does express it, but it's the shock for her, which I think is so beautiful.

It seems that, despite the breakthrough, Maleficent is already back to her old ways in the sequel. Will another plot twist be on the horizon? It's too soon to say, but with months to go until the premiere, Disney fans have plenty of time to speculate.