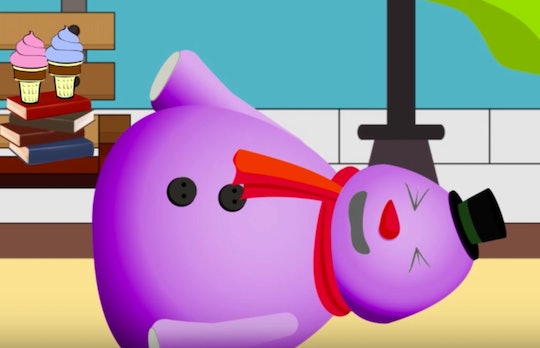 It's no surprise that the internet can be a dangerous, unpredictable place for kids — so, unfortunately, parents definitely have to keep their guards up even when toddlers settle in to watch such seemingly innocuous Peppa Pig or Doc McStuffins clips online. Because, as one journalist and mother recently discovered, disturbing content is masquerading as kids' shows on YouTube. It's a phenomenon that's unsettling as it is pervasive, and, in many of the cases, young kids seem to actually be the targets of this malicious deception (not to mention possible serious cases of copyright infringement).

Writing for The Outline earlier this month, Laura June detailed how her 3-year-old daughter had inadvertently started watching a version of Peppa Pig on YouTube that was decidedly distinct from the parent-approved Nick Jr show for the preschool set. "Peppa goes to the dentist, who has a giant needle and a lot of scary tools," June wrote in describing the video, titled "#Peppa #Pig #Dentist #Kids #Animation #Fantasy." "The pigs are mysteriously forest green rather than pink. Burglars appear to try to burgle."

And it wasn't an isolated incident. June's daughter had also stumbled upon a knockoff Doc McStuffins clip that features a hypodermic needle, zombies, and a fiery car chase.

In fact, these kinds of videos, which seem to exist to generate ad revenue while preying on kids, are lurking on YouTube en masse. A BBC Trending analysis prompted by June's post identified hundreds of such videos on the site. They're centered around children's favorites like Frozen, the Minions franchise, Thomas the Tank Engine, and a whole slew of others — but there's nothing kid-friendly about them. And this is not a fringe enterprise affecting just June's daughter: Videos on one of the channels, "Toys and Funny Kids Surprise Eggs," have garnered a combined total of more than 5 billion views, making it one of the 100 most-watched channels in the world, the BBC reported.

Many of these videos — which span across several channels — expose children to violence, nudity, and sexual themes, The Sun reported. They portray such wildly inappropriate scenes, such as a Doc McStuffins character being injected with a needle and Peppa Pig characters assaulting one another with axes.

And as June pointed out, these videos are all but unavoidable for very young children who can't tell the difference between the scary content and the real shows. "These videos are for kids, intentionally injected into the stream via confusing tags, for them to watch instead of legit episodes of beloved shows," she wrote.

In a statement to Romper, a YouTube spokesperson stressed that YouTube is intended for kids 13 and older and encouraged parents of younger users to use the YouTube Kids app instead. (June, for her part, wrote that even that is a challenge: "The YouTube Kids app, by its own admission, does filter the videos to try to ensure it’s kid friendly, but it does so in an automated fashion, meaning that things like faux Peppa Pig sneak in quite easily.") The spokesperson invited users to flag any content that violates the site's community guidelines. Additionally, in a statement to the BBC, a YouTube spokesperson recommended that parents disable the "search" feature on the YouTube app for a "more restricted experience."

The Sun noted that YouTube has removed some of the offensive content, but also provided a list of channels for which parents should be on the alert. These include "Toys 4 Fun!," "Lor Bad Babysmile Kids TV," and "Superhero-Spiderman-Frozen."

The whole thing is a scary reminder of why the internet and small children don't make the greatest combination.