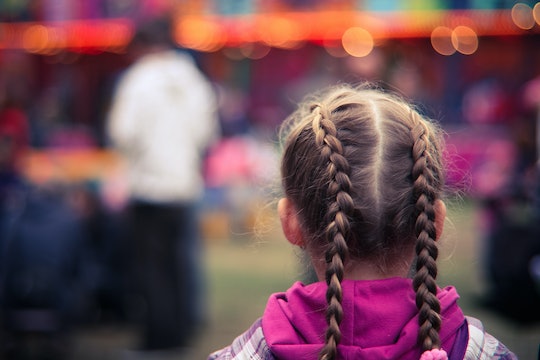 The decision to end a relationship is rarely an easy one, especially for couples that have children. While the decision might be what's best for everyone involved, that doesn't necessarily mean it's an easy one to make. The stress of a separation is felt by everyone involved, but kids can be particularly susceptible to feeling the impact of a major change. For many years researchers have wanted to better understand how divorce affects kids, and a new study shows that divorce isn't what harms kids' health — how parents handle the divorce is what matters.

Researchers at the universities of Santiago de Compostela and Vigo in Spain looked at the health of more than 400 children between the ages of 2 and 18 and observed that kids whose parents had separated were twice as likely to have a number of health woes, including stomach problems, neurological complaints, and even skin conditions. The researchers believe that psychosocial stress is a major contributing factor to the development of these conditions — which can be true for adults and kids alike. That being said, they also pointed out that it's not the divorce itself that's linked to the increase in stress, but rather, how parents handled the divorce.

The co-author of the study, María Dolores Seijo Martínez, explained:

It is not the break-up in itself that has negative effects on the children's health, but improper handling of the situation by the parents. This is indicated in the scientific literature and validated by our data.

Previous research has also linked kids' behavioral problems with parents' separation, but increasingly the research has shown narrower differences between kids whose parents are together and kids whose parents are divorced, according to a review by the American Board of Family Medicine. On the flip side, research has also indicated that when parents don't separate because they think it will be better to "keep the family together," — even though they have irreconcilable differences that are affecting the family — it has a negative impact on kids, too, according to Dr. Ruth Peters, a clinical psychologist and contributor to TODAY.

In many cases, it turns out that when a parents' relationship is causing a lot of turmoil at home, kids often would prefer that they separate. In 2015, a U.K. family law organization called Resolution polled youth who had experienced parental separation and found that 82 percent preferred their parents' divorce to them staying together when they were unhappy — just because they thought it was what was best for the kids. While it can certainly be challenging for families to navigate the changes that come along with divorce, the kids Resolution surveyed felt the most important consideration for their well-being was feeling involved in the process — but not being pitted against one parent by the other.

Outside the home, divorce has become more socially acceptable, and as a result kids are less likely to experience teasing from peers. But if they are struggling, it's important to keep in mind that many of the behaviors kids demonstrate during periods of any major life change — like a divorce or the loss of a parent — aren't necessarily permanent, according to the American Association of Marriage and Family Therapy. Often, they are only transient responses to stress, although some children may develop longterm emotional issues. This is a particular risk for kids who may not have the skills needed to process and express their emotions in a healthy way. That's why researchers believe it's so important for parents — and other adults in a child's life — to model healthy coping skills.

Helping kids learn to talk about and handle their feelings in a healthy way is important for any child, not just those whose parents are separating. While it can be overwhelming and challenging to know where to begin, there are lots of resources available to help parents tackle the topic of divorce in a productive, supportive, way no matter how old their child is. In fact, even adults can benefit from reflecting on healthy ways to manage stress, especially during difficult times that involve the ones they love.

More Like This
Banana Boat Sunscreen Has Recalled Products That Were Found To Contain Benzene
New York Can End Religious Exemptions to Vaccine Mandates, Says A Federal Appeals Court
Little Leaguer Comforts Pitcher Who Accidentally Hit Him In The Head In Viral Video
This Job Listing For A Nanny Has Gone Viral For Being Completely Unreasonable