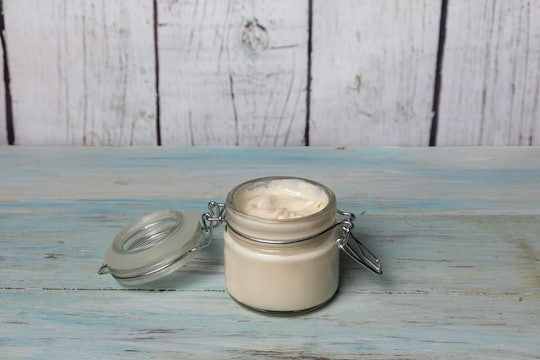 If you choose to breastfeed, there will come a time when your nipples are sent into a state of angry rage from all of the infant abuse that they suffer. You may not always have your boob balm at the ready, so it's good to have a DIY nipple cream recipe handy for when you can't get to the store.

Nipple creams are usually pretty basic in their ingredients — some sort of beeswax, a fat like cocoa butter or olive oil, and then it might include some plant extracts, with marshmallow root and calendula being the most popular. Making nipple cream at home is surprisingly simple. However, if you are doing this to save money in the short term, you'll find that the individual ingredients are fairly expensive, so unless you're going to make a lot of the cream, or you happen to have the ingredients on-hand, this will not be a money-saving venture.

When my children were gnawing on my nipples on a regular basis, I relied upon a few tried-and-true nipple creams, as well as using my MawMaw's recipe for chapped skin when I was truly desperate. (She once claimed it would fix a cow's udders in -20°F weather, and I believe her.) Hers was dead simple, had no essential oils or marshmallow root, or eye of the tiger. It was just stuff that she either had in her kitchen, or could get at her family's grocery store in West Virginia.

The important thing is that everything needs to be edible because you will be applying this after cleansing your nipples throughout the day, and your baby will be ingesting some of it, so this isn't the place to use an essential oil that you aren't sure about or that your pediatrician hasn't given you the OK.

MawMaw's Boob Balm (Her name, not mine.)

Melt the beeswax and cocoa butter in a double boiler over the lowest heat possible. Stir the mixture with a wooden spoon gently, making sure to never allow it to reach the smoking point. Stir in the oil until it's completely combined, and pour into a small mason jar to cool. Place lid on the balm, and screw tightly. It will last about four to six months.

It's a great balm, and to be honest, I still make this with some regularity, even though my children are no longer babies. I add a few drops of orange oil (because I have it on hand for brownies — trust me, it's delicious) and use it on my lips, on my knuckles, the heels of my feet, and it's really great to use on wind-chapped ears after a day of skiing or snow tubing. If you're really industrious, jars of this make fantastic gifts. Once people know how amazing the formula is, they're going to want it all the time.

For a more adventurous DIY nipple cream, you might try an infused cream, like this recipe from the Kitchn that utilizes calendula oil. This one is intense, and takes weeks to make, so if you're looking for something speedy, go for the above recipe.

More Like This
Can You Breastfeed After A Breast Lift? Experts Explain
If Breastfeeding Makes You Tired, Here’s How To Keep Your Energy Up
There’s A Reason Your Baby Always Falls Asleep While Breastfeeding
The Difference Between The PICU & The NICU