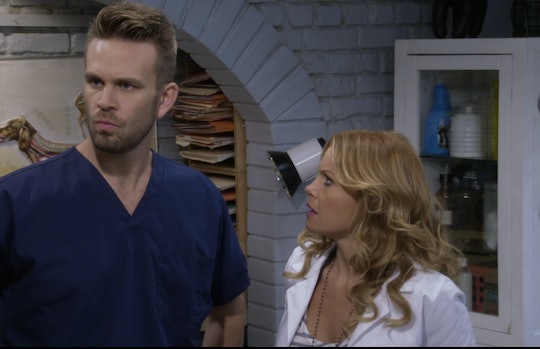 D.J. Fights For Her Job On 'Fuller House' & It's A Totally Feminist Move

D.J. Tanner has turned into quite the modern lady. For one, her wardrobe is much better. She's also a super efficient single mom — even snagging her sister and BFF to help out was a pretty creative move, right? But when her boss gives his less qualified son a promotion over her, D.J. fights for her job on Fuller House, and it's the ultimate feminist move. That she kind of gets it is a bit of a let down.

Here's how it goes down: the series opens with her working at an animal clinic as a vet. Her hippie boss, who owns the clinic, is off to some Buddhist retreat and brings in his son, Matt, to help her out while he's gone. When Harmon comes back, he decides to leave the practice entirely to his son. Right in front of D.J., who has been working there for seven years, according to the script. She is rightfully annoyed and tells Matt, as a friend, right away. That's a good move. It's a sitcom, so things don't progress in a super human resource-y sort of way, but the message is clear.

During a party, Harmon thanks D.J. for "helping him out" for all of these years. She uses those words again that back in his face and resigns in public. Another good move. Later, since Matt sees her disappointment (or because he also wants to be her boyfriend?), he offers her a partnership. She accepts, they make a new sign, cut a ribbon, and everyone lives happily ever after.

It's a little bitter sweet when it comes to gender equality in the workplace. It's a very good, feminist plot point that D.J. is visibly upset about not getting the promotion and decides to just get out of the situation right away. It's also good that it's obvious that Dr. Harmon is the bad guy for setting it up that way. But he's also portrayed as a head-in-the-clouds doofus who "just might not know any better." Uh, come again?

Sure, D.J.'s part owner of the clinic now. Great. But the writers took two steps forward by giving D.J. a voice and then just stopped in their tracks and it's sort of a let down. A real feminist ending would have been Matt, who obviously saw what was going on, standing up to his father and saying, "uh, D.J.'s been running this clinic while you've been making bad jokes about pigs for seven years, the job should go to her." Alas, that is not the case.

OK, no one expects a sitcom to change the world, but it's impossible to watch a show that involves the three lead females calling themselves "the she-wolf pack" without thinking critically about how actual feminist values might play out. Overall, Fuller House is kind of progressive. Maybe that's just enough. We're talking about a remake of Full House that includes a Bachelorette spoof where D.J. chooses herself and the men end up aghast like it's some surprise she'd rather stay single. She-wolf squad goals are great. But wouldn't it just be more interesting if the men were in on the joke, too?