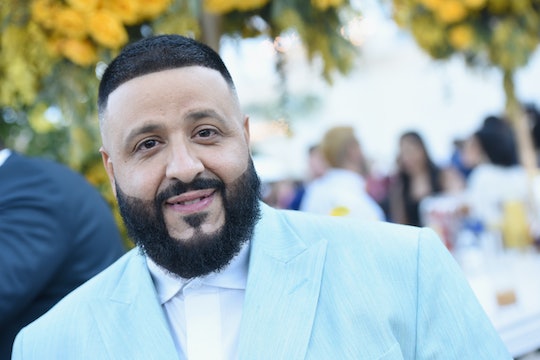 DJ Khaled is famous for being famous at this point, between his own songs, all-star collaborations, and headline-grabbing social media posts. So, you'd think an accomplished music star could spearhead something as simple as helping a toddler ditch diapers, right? Well, think again, because DJ Khaled says potty training is a "team effort" and I think it's safe to say many parents out there can relate.

DJ Khaled, a collaborator to the likes of Justin Bieber, Drake, and Rihanna, has two other important titles at home: partner and dad. These roles keep him very busy, as he noted in a Wednesday interview with People. Khaled told the publication that he's in the process of moving his son Asahd, 2, out of diapers and ostensibly into big boy underwear, which might sound easy enough to someone who has never crossed paths with a toddler before.

"All of us are taking part, Mama of Asahd, Father of Asahd, and we love our nanny," said the musician, in a nod to his album's new title, "Father of Asahd. "She’s family, her name is Rosa. So it’s a team effort, you know what I’m saying."

Yes, Khaled, us parents really know what you're saying. Until you've dealt with toilet training firsthand, it's one of those things that sounds simple. But, as many parents out there already know, this can be a tough journey, and it doesn't hurt to have as much help as possible.

Part of the difficulty here is that every child is unique, as I've learned from raising three kids. And according to Ask Dr. Sears, a parenting resource site, potty training is high on the list of questions parents of toddlers tend to have.

But back to Khaled, who aptly pointed out that the whole toilet training thing can take a lot of finessing, for whatever reason that might be. And it's best not to rush the process, as this can backfire on occasion. So, it can be a good idea to wait until you have more time, as I did with my third. While that might sound lazy on paper, it made the whole entire process a breeze for this mama.

I do wonder if Khaled, fiancée Nicole Tuck, and Nanny Rosa are aware that boys can take a bit longer to get the hang of using the potty than girls, as Parents noted. When potty training a little guy, for instance, it can be most helpful if a male role model gets involved and shows how it's done, according to Parents. And although I don't know Khaled personally, I'm pretty sure a devoted dad like him knows this and is already working with Asahd.

After all, the music star has made it clear that family comes first. "I do everything for my son and my queen and my family," he told People. "The whole album is inspired by my son."

So cute. Fingers crossed that the musician, who also told the outlet that he misses out on Asahd's development when he's touring, will stay put for the time being to help with this newest stage of his son's life. But if work does take him away, at least he has a support system at home to ensure that potty training is a success.