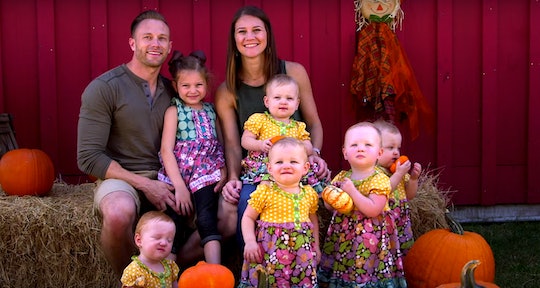 Adam & Danielle Busby Manage Just Fine Without A Nanny, Thanks

TLC viewers have been falling for Adam and Danielle Busby ever since their show, OutDaughtered, first premiered in May 2016. Even just watching the husband and wife take care of their toddler quintuplets and one older daughter can get exhausting, so many fans are wondering if the Busby parents get a little extra help. Do Adam and Danielle Busby have a nanny? They occasionally have helpers. but mostly, Danielle is a stay at home mom who manages the daytime circus by herself while Adam works, despite the fact that she often has a film crew around creating extra excitement.

In an interview with Channel Guide, Danielle talked about how she has managed to make a schedule for her very busy life raising the first all-female quintuplets born in the United States. About having extra help with the quints, she said,

I have lined up helpers to come at certain parts of the day. Sometimes I have help and sometimes I don’t, and I’m OK with that. It might be anywhere from thirty minutes to an hour where I’m alone at home by myself.

But it's not exactly easy finding people to come take care of little Olivia, Ava, Parker, Hazel, and Riley, as well as 6-year-old Blayke, so that Danielle can sneak out for some quality me-time.

In the same interview, she went on to say,

I love my job. I’m a mom and it’s everything I wanted it to be, growing up. I never thought it would be real, that I would get to stay home with my kids. But now I do and it’s wonderful — but I am surrounded by babies all day, and it’s hard for me to try to get time away to go get my hair done, or to go take a nap. It’s a process to get people there to watch the babies.

Of course, it's all complicated by the fact that she often has TV cameras in her house too. That adds a whole other group of people whose movements she has to be aware of, and they're not necessarily going to jump in and intervene with a helping hand if she gets overwhelmed. That wouldn't make for good TV!

Somehow, though, Danielle seems to have it all down, or at least as down as one possibly can have this particular situation. She told Style Blueprint all about her well-practiced schedule, saying,

It’s just the same Groundhog Day routine every day. You do bottles, milk, breakfast, get them dressed, play, they nap and that’s when I shower or do some laundry, constantly the dishwasher, constantly cooking or making food, constantly cleaning up, and they usually go to bed about 7 p.m., and then you start the dishwasher for the night and start over again in the morning.

Whew! Of course, looking at photos like this helps to show why all the stress is worth it:

Kudos to the Busby family for handling an overwhelming amount of work with humor and grace, even without a regular nanny!