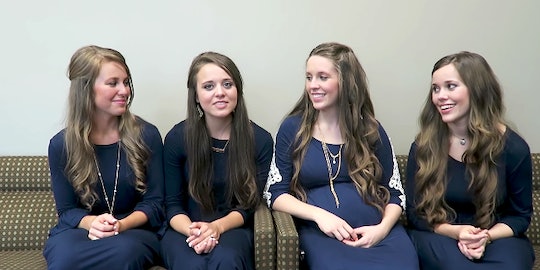 Here's Why So Many Duggars Have Had Home Births

Let's get one thing out of the way right now: I will admit, I am not the biggest fan of the Duggars. But they are certainly a popular reality TV show family, and even I find myself curious about the various weddings and births they announce or air on their TV show, Counting On. The Arkansas family — initially famous because Jim Bob and Michelle Duggar share a grand total of 19 kids together — are hard to escape, whether you particularly like them or not. And whenever one of the Duggar kids is expecting, it makes the news. Because of the Duggars' incredibly religious and conservative lifestyle, people want to know everything about them, including how they get married and raise their kids. For example, many of the Duggars have had home births — at least, in recent years, they've certainly tried to.

One of the Duggar daughters, Joy-Anna, got married in May and is currently expecting her first child, according to People. Joy-Anna and her husband, Austin Forsyth, seem very excited about the pregnancy, like many parents-to-be. Joy-Anna told People:

I have a lot of good memories of my mom teaching us and the quality time we spent together, and I’m really looking forward to doing that with my own children. It’s such an amazing thing to be a parent and raise children!

But she hasn't said whether she plans to give birth at home, in a hospital, or somewhere else entirely.

Now, most of the time I'd say it's kind of inappropriate to pry into whether a woman is going to give birth at home if they don't offer that information on their own. It's really not a stranger's business where a mom-to-be decides to give birth.

However, the Duggars have shared their preference for home births in the past, so it's not a completely out-of-left-field question. Michelle Duggar had her first five children in a hospital, but Jinger — her sixth child — was born at home, according to The Duggar Family Blog. Her seventh child, Joseph, was also welcomed via a home birth.

However, with the rest of her children, it sounds like Michelle chose hospital births. Their 19th child, Josie, was very premature, and born in an emergency C-section that necessitated a hospital birth, according to ABC News.

And the other Duggar women who have had kids certainly tried to go the home birth route. When Jill Duggar-Dillard had her son, Israel, she planned on a home birth, according to Us Weekly. But after more than 70 hours of labor, he came into the world only after she had an emergency C-section.

For Jill's second pregnancy, she had another C-section at the hospital after being in labor for 40 hours, and finally delivered her second son, Samuel, according to People. However, it sounds like she was a little more prepared for that possibility this time around. She told People:

There’s a level of ease that comes with your second pregnancy. Derick and I have been down this road together, so we’re comfortable. I’m just going to see how it goes, try to be healthy and prepare as much as I can. But this time I know that labor is unpredictable.

And speaking of unpredictable, another Duggar sister, Jessa, also had an unexpected experience with her first birth. She did give birth at home, as she planned, but ended up going to the hospital for excessive bleeding after she gave birth, according to Parents.

After experiencing a very long labor with her first son, Spurgeon, Jessa and her husband Ben Seewald welcomed their second son after only a few hours of labor, CafeMom reported. Henry Wilberforce was also born at home, but he came a lot faster than his brother. Just goes to show you that babies don't really care what plan you have for your birth — they'll come when they want to.

It's still a mystery whether Joy-Anna will choose to try a home birth, but she wouldn't be the first in her family to do it, and she probably won't be the last.