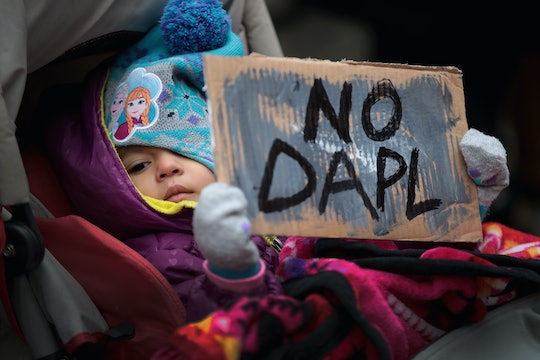 In North Dakota on Wednesday, the water protectors/protestors fighting the Dakota Access pipeline were ordered to leave the camp they set up, and it has been mostly vacated in the face of arrests and an eviction deadline set by the U.S. Army Corps of Engineers and the governor of the state. But there's also another protest taking place outside the Sacred Rock camp and the Standing Rock Reservation: that of a divest movement, which encourages #NoDAPL supporters to divest money from banks funding the project. And it's getting attention. Between the removal of water protectors at the site drawing outcry, and the divest movement, it's fair to ask — do Americans support the Dakota Access Pipeline? As it turns out, the project isn't very popular.

According to a Quinnipiac poll released Thursday, 51 percent of respondents are against restarting the Keystone XL and Dakota Access pipelines. That's slightly more than half of voters, and not an insignificant number, considering the fact that everyday Americans like those responding can participate in opposing the pipelines by divesting from banks that fund them. More and more, supporters of #NoDAPL are using their money to send a message — by removing it from institutions bankrolling the projects.

Journalist Mark Harris tweeted about the Quinnipiac poll findings, pointing out the 51-38 percent difference between those who oppose the Keystone XL and Dakota Access pipelines and those who support them. But the poll wasn't solely focused on the pipelines — it also found that 60 percent of voters were against building a wall on the Mexican border, 54 percent are against repealing the Affordable Care Act, also known as Obamacare, and a whopping 76 percent are against lowering taxes on the wealthy. So the poll wasn't narrowly-focused, and support or opposition for the pipelines was just one of the topics covered.

The physical protest at the Sacred Rock camp drew a lot of attention, partly because of the sheer number of people involved in it. At one point, more than 10,000 people were at the camp. Veterans got involved in the fight. But it wasn't enough to stop authorities from coming in and clearing the camp this week, with 46 people being arrested Thursday, a day after the evacuation deadline, according to the New York Times.

Outside the camp, support is growing for a divestment of funds from the banks that contribute money to the Dakota Access pipeline. In early February, the Seattle City Council Finance Committee voted to divest $3 billion in City of Seattle money out of Wells Fargo, one of the banks financially invested in the project. Wells Fargo didn't immediately respond to Romper's request for comment.

There are websites with instructions on how individuals can divest from financial institutions supporting the Dakota Access pipeline, which would help to defund the project. And recently, more than 120 investors signed a letter calling on banks funding the pipeline to reroute it away from Native American land, according to the Financial Times. So the movement is certainly getting attention.

By comparison, a poll conducted in late January found that 43 percent of voters opposed a similar project, the Keystone pipeline. There are websites that list financiers for that pipeline as well.

When money talks, pulling money from causes and projects someone doesn't believe in may be one of the best ways to make opinions known. Especially for those who couldn't physically be present at #NoDAPL protests, divestment and speaking out on social media are acts of resistance that still remain.

More Like This
What Exactly Are Minions, Anyway ?
Family Of Grandfather Killed In Highland Park Mass Shooting Say He "Saved" Their Lives
Megan Fox Explains Why She Asked Machine Gun Kelly If He Was Breastfed As A Baby
Is It Safe To Keep Using Period & Fertility Apps In A Post-Roe America?