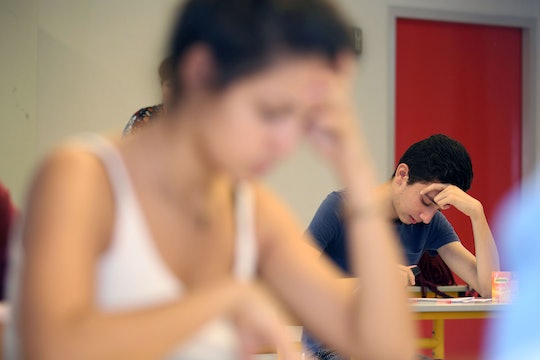 Do Babies Conceived During The Winter Really Have More Learning Disabilities?

Depending on what you believe, the weather really can affect a person. But can it really be true that babies conceived during winter have more learning disabilities? A group of researchers at the University of Glasgow happen to think so. The doctors partnered with Cambridge University, England's National Health System, and the Scottish government to study 800,000 kids who attended school between 2006 and 2011. According to their findings, they discovered a pattern: Children with learning difficulties, ranging from dyslexia to autism, were often conceived in the winter.

The conclusion the group reached was that vitamin D deficiencies in the winter months lead to delayed development in the womb. They didn't get to test for vitamin D levels, but the assumption is based on the fact that 8.9 percent of those conceived in the first quarter of the year had learning disabilities compared to 7.6 percent of those conceived between July and September.

Prof Jill Pell, director of the Institute of Health and Wellbeing at the University of Glasgow told the BBC, "We know that vitamin D is essential for healthy brain development in babies, and the first few weeks in pregnancy are a critical period when the brain develops."

She added that the weather in the U.K. isn't ideal either when it comes to vitamin intake. "In the United Kingdom in the winter months we don't have enough sunlight for our bodies to actually produce vitamin D," he added. "... Other studies that have been in animals have confirmed that if you have animals that are low in vitamin D their offspring have brain problems and if you give vitamin D they are avoided."

Vitamin D is super important. In fact, most doctors agree that everyone should be taking vitamin D supplements. Vitamin D is good for your bones and teeth and regulates the amount of calcium in the body, but be wary — if you take too much vitamin D, you can cause an imbalance and mess around with your kidneys. Keep it simple and check with your doctor about what's best for you, especially if you're pregnant or have any other health condition.

While the lack of vitamin D could perhaps cause developmental problems in the womb, babies and kids should also be getting vitamin D on a regular basis. A study earlier this summer from the University of Manchester found that tiny people up to age 4 should be taking vitamin D supplements every day, all year round. If, while they're still infants, their baby formula has a lot of vitamin D, one could probably skip it. Again, check with your doc and make sure.

That everyone should take vitamin D supplements is a change of advice from U.K. docs, who used to think just infants or people with poor health should take the vitamin since they assumed people would just be getting enough sunshine. (Eventually, they found that one in five adults and one in 6 kids in England had low levels.)

So think about it the next time you're at the pharmacy. It might be worth taking a trip down the vitamin aisle and stock up, especially now that summer's over.