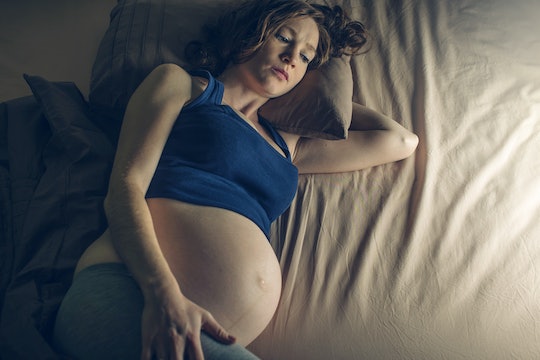 Apparently Babies Aren't Always Happy In The Womb & Here's Why

When you're pregnant, people tell you it's easier to care for your baby in utero than after they are born. Essentially they mean, "don't be in a rush to be done with pregnancy because then you'll just be up all night with feedings and diaper changes." This is true in some ways — sleep deprivation is no fun — but it also advances a false idea that babies are completely content before they are born. In fact, research and ultrasound images show us that babies aren't always happy during pregnancy. But do babies cry in the womb? Here's what science tells us about fetal displeasure and coping behaviors.

A 2005 study published in Archives of Disease in Childhood found "what appears to be the fetal homologue of crying." Captured on ultrasound, researchers describe crying in the womb as "an initial exhalation movement associated with mouth opening and tongue depression, followed by a series of three augmented breaths, the last breath ending in an inspiratory pause followed by an expiration and settling." Of course, this in-utero crying is silent, but it adds a fifth distinct behavioral state to the list of previously recognized fetal activities: quiet sleep, active state, quiet awake, and active awake.

Now that we know human fetuses cry in the womb, you may wonder when this behavior starts. Over email, OB-GYN Mary O'Toole of Saddleback Medical Center in Laguna Hills, California tells Romper that "a baby may cry in the uterus as early as 28 weeks." Yen Tran, OB-GYN at MemorialCare Orange Coast Medical Center in Fountain Valley, California adds that in the womb "along with thumb sucking and breathing movements, babies make facial expressions such as opening their lips, wrinkling their noses, and lowering their eyebrows. A baby’s facial expressions become more complex each gestational week to express anger, happiness, and sadness." So contrary to the image of perfect bliss we often imagine gestation to consist of, fetuses can experience and display a range of emotions and reactions.

As every parent learns soon enough, it's impossible (and arguably undesirable) to protect your child from any kind of pain or discomfort. However, many cultures believe that the pregnant woman's state of mind has a direct effect on the development of her baby. For example, practitioners of Ayurveda (a system of medicine from India), believe that "maternal attitude is the most important factor in determining the child's physical and emotional well-being. The family and friends of the pregnant mother provide her with much emotional support. The family often cooks special treats and friends bring gifts and sweets. The culture believes that for the baby to be happy, the mother must be happy. The mother takes more rest and the father and in-laws help out with household chores."

Similarly, Traditional Chinese Medicine (TCM) teaches that "the health of the parents at the time of conception translates directly into the quality of the child’s constitution... The mother is physically and spiritually the vessel into which the unborn child is placed, and so her state of health in every way is of the greatest importance." Western medicine also links the mother's physical and emotional well-being with the well-being of the fetus. Tran explains that:

"A pregnant woman’s thoughts and emotions are said to communicate through neurohormones to her unborn child. When a pregnant mother is anxious, stressed, or in a fearful state, her levels of cortisol and adrenaline increase to put the body in 'fight or flight' mode. Stress hormones enter the womb and potentially activate the child’s endocrine system, which could influence the child’s brain development. On the other hand, happy thoughts can lower blood pressure, which could increase blood flow to the placenta and boost the immune system. That’s why it’s important for a pregnant woman to have strong confidence and good self-esteem."

The takeaway here is that pregnancy is the most important time in a woman's life to ask for help, emotional support, and pampering. For women, it's often easiest to put ourselves last, but nurturing yourself also nurtures your child, both in the womb and after birth. Tran recommends activities that could boost feel-good and relaxation hormones in pregnant women including creative hobbies, aromatherapy, nature walks, romantic dates with a partner, and swimming. Figure out what makes you feel good and do as much of it as possible.