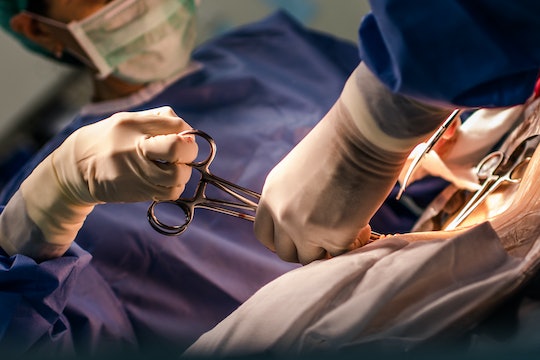 I am a worrier and often jump to the worst conclusions. Like if someone's late, they're either standing me up because they hate me or because they got in a wreck. It's no wonder that during pregnancy I would ask my OB-GYN if babies get cut during a C-section. It sounds like a routine surgery, but my brain makes these leaps.

There is no doubt that C-sections can be a lifesaving procedure for both mother and child, and if I needed one, I'd be hopping on that table with as much movement as my hugely pregnant body would muster. But like any procedure, it's not without its risks. (And neither is vaginal birth, to be fair.) But do those risks involve potential injury to the baby being delivered, such as the baby being accidentally sliced by the doctor's scalpel in the rush to get the baby topside? Board-certified OB-GYN Dr. Candice Fraser of Your Doctors Online, tells Romper, "Unfortunately babies do sometimes get cut during C-sections."

But don't let your bile raise too soon. "Fortunately, most cuts or lacerations are very shallow and will heal on its own without needing treatment or leaving a scar," she adds. C-sections are complex procedures, often done in some haste due to fetal or maternal distress — preeclampsia, nuchal cord, or a drop in the baby's heart rate are all cause for emergency C-sections, noted the American College of Obstetrics and Gynecology (ACOG). Fraser says that incidences like these might require "the obstetrician to deliver the baby in a minute or less, and this is probably the most likely scenario when lacerations occur."

Think of it this way — if your baby was stuck in a hot car, you'd break the glass to get to them. Sure, you'd do everything you can to make sure that minimal injury is caused by the shattering of the window, but you'd still break the window and pull that baby out ASAP.

And while Fraser reports that most of these lacerations are minimal, sometimes, they're a bit deeper. "Very rarely, lacerations may be a little deeper and the baby will be referred to a plastic surgeon right after birth to ensure that permanent scarring is minimized," Fraser says. While my son was not born via C-section, he did get a decent laceration on his leg as an infant thanks to a crappy high chair situation, and 11 years later, I often have a hard time spotting the scar, it's so little. Babies are remarkable healers.

Another reason why babies might get nicked during a C-section is that doctors are often working with tough scar tissues, according to Fraser. But don't worry overmuch about this, she says. "In general, data suggests that these lacerations only occur between 1 and 3% of the time and result in no long term consequences for baby." Yes, it's a scary thing to think about, but in the grand scheme of things, it's not a big worry.

More Like This
Here's How To Keep Your C-Section Incision Dry
The Difference Between The PICU & The NICU
Can You Mix Breast Milk & Formula? Experts Weigh In
Are You Leaking Amniotic Fluid Or Is It Normal Discharge? Experts Explain