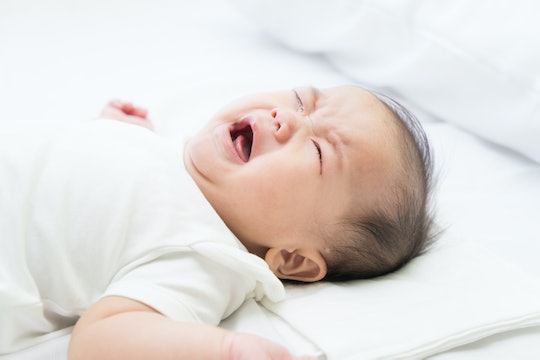 Do Babies Get Joint Pain?

When babies are little, it's often easier to tell why they're upset. Hunger, dirty diapers, lack of sleep or attention are commonly the pains that inflict infants. But, as your baby grows, and bumps and falls become inevitable, their cries of pain can becoming confusing. Without a visible bruise or scrape, how can you really tell where they are hurting? If your little one seems to be in pain, and there's no other symptoms, you might wonder, do babies get joint pain?

According to Cleveland Clinic, most joint pain in young children can be attributed to the infamous "growing pains."Growing pains typically occur in children 3 to 7 years old, and can be described as a throb or dull ache in the legs, knees, head, and abdomen. Some kids are more likely to have growing pains, and some feel them very intensely. Typically, growing pains are felt more at night, and usually subside in the morning.

However, certain pains, especially ones that are persistent and focused on the joints, could be a sign of something more serious, as the Cleveland Clinic mentioned. It's important to talk to your pediatrician if you notice any lingering symptoms of pain or discomfort in your child.

According to Lurie Children's Hospital of Chicago, things to look for include persistent pain, pain in the morning, or tenderness, swelling, and redness in a joint, joint pain associated with injury, and limping, weakness, or unusual tenderness. These could be signs of something as benign as toxic synovitis (scary name, but not a scary condition), which includes inflammation in the hip, or coxsackievirus, a common virus. But, more serious conditions that could be punctuated by joint pain include Lyme disease, rheumatic fever, or even juvenile arthritis. Joint pain in young children could also be a symptom of an infection, most commonly staphylococcus aureus, or "staph," according to the American Academy of Orthopedic Surgeons.

Babies can have small aches and pains, and more than likely, it is due to a minor bump or a bruise. As they get older, growing pains may be experienced as well. If your baby seems to be in constant discomfort or pain, or has trouble doing things normally done before, like walking or crawling, your pediatrician will have the best recommendations with which to move forward.

More Like This
How Hot Is Too Hot For Babies? Experts Weigh In
23 Sweet Quotes To Dedicate To Your Rainbow Baby
"Crybaby Ambulance" In Europe Will Help Exhausted Parents
Double Your Fun With These Instagram Captions For Twin Pics