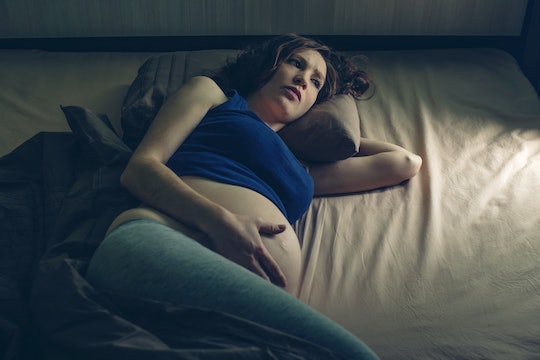 Yup, Your Baby Is Totally Peeing Inside You During Pregnancy & Here's Why

There is a lot going on in utero, and if you've ever been pregnant, this won't surprise you. You can feel every roll, every kick, every tiny movement. After all, there's only a thin wall separating your baby from your internal organs and the outside world. Babies in utero are developing much of the bodily functions they'll need once they're born, and doing so with gusto. But is it all of the bodily functions? You can feel your baby's Rockette-style kicking and hiccups, but what about the more mundane facts of life. For instance, do babies pee in the womb? If so, where does it go?

The simple answer is yes, babies do urinate in utero. According to the American College of Obstetricians and Gynecologists (ACOG), somewhere between weeks 13 and 16, babies begin learning the process of swallowing. This in turn leads to them ingesting the placental fluid contained in the womb, and that triggers their kidneys and bladder to function. No one, not even babies, can swallow an indefinite amount of liquid without producing waste, and so they begin urinating soon after they learn to swallow. This also allows the amniotic fluid to recycle itself throughout the pregnancy, keeping your baby flush inside their little swimming pool.

However, most babies hold their solid waste until after they're born. Perinatal waste is referred to as "meconium" and its presence is worrisome. There are multiple risks associated when babies poop in the womb, but the primary concern, according to Karger Medical Journal, is something called "meconium aspiration syndrome," which is when the baby poops in the womb and that meconium-stained amniotic fluid is then inhaled by the baby, causing potential respiratory challenge, congenital malformations of the airway, and decreased oxygen capacity at birth. If there is meconium present in the fluid at birth, interventions such as supplemental oxygen will be completed as soon as it is identified to hopefully minimize any potential negative outcome.

Meconium is a pretty scary risk, but urine is not. Babies are supposed to pee in the womb, and often. You can't feel it happen. Case in point, when I had the final ultrasound of my son, I was about 36 weeks pregnant, and they were checking for size. He was fine, actually robust, but his head was already way down, skewing my measurements. The ultrasound showed him ready for birth, and ready for life, because he had his hand on his junk and was just firehosing the inside of my uterus the way he would the area around my toilet for the foreseeable future. (I say around because 9-year-old aim at 6 a.m. is not spectacular.) Living with a boy is like living in a drunken frat house 365 days a year. Socks and underwear are everywhere, you're constantly cleaning the bathroom, and if you don't have plenty of snacks, a mutiny will happen.

Babies pee in the womb all the way up until they're born, and many of my friends have discussed with me how we were shocked that we got peed on by our babies during the kangaroo holding period directly following childbirth. But let's be honest, at that point, what bodily fluid isn't covering you? At least you're already in the homestretch for some long moments in the shower by the time they're cleaning off the tiny tot on your chest.

It's a good thing that babies urinate in utero. It points to a healthy waste system, developing kidneys, and active bladder, which are all crucial functions in life, even if you wish that they could maybe not be so functional between the hours of say, midnight and 4 a.m., when you inevitably get a spray to the face when changing your baby because you're trying to do it with one eye open. When they manage to hit that single open eye, you'll remember they've been practicing for this moment all their lives, even before they were born.