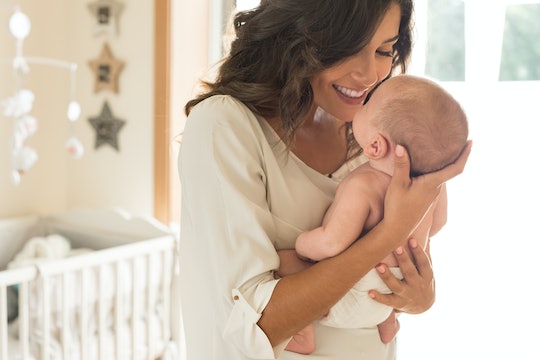 Do Babies React To Scent? Yes, And It May Help Your Relationship

Watching your baby's senses develop is one of the most fascinating joys of parenthood. After a few weeks, your little one responds to colors, sounds, and touch with more interest and focus. With this in mind, do babies react to scent or is your little one practically nose-blind during those early months?

Not only do babies react to scent from day one, but they also appear to understand the difference between certain odors. According to Parenting, newborns are able to detect the scent of breast milk, and infants can distinguish their mom's breast milk from someone else's through smell by the time they're two weeks old. by smell. And your baby's amazing nose doesn't stop there. Even as a newborn, your baby can recognize and feel comforted by your own scent, as noted in Baby Center. In fact, your little one might not care if you occasionally skip a shower or go without perfume, because it's your regular, baseline body odor that she loves. Basically, your baby uses all senses, even smell, to bond with you.

Although "mom" may be a baby's all-time favorite scent, infants also show a preference for certain other smells. As noted in Parents, babies tend to be drawn toward sweet smells, as well as the bright scent of lemon. It makes sense, given that breast milk probably tastes pretty sweet to your little one. On the flip side, your baby may not react well to scents that are very strong or unfamiliar, according to the Secrets of Baby Behavior. Basically, she's going to have a preference for anything that smells like you, your milk, or the womb, so the quick blast of pine-scented air freshener may cause her to freak a bit. She doesn't even have a concept of the tree yet, so the scent is just something strange and foreign to her.

And if you also feel exceptionally captivated by your baby's scent, remember that this is totally normal. According to a 2013 study in Frontiers in Psychology, the smell of a newborn baby may jumpstart your bonding mechanisms. In general, you and your little one both use one another's scent as a powerful tool to bring you even closer together.

More Like This
Here's Why Wearing Long Sleeves In The Summer Can Be Good For Your Baby
How To Breastfeed A Baby With A Cleft Lip Or Cleft Palate
The Covid Vaccine For Kids Under 5 Has Been Sent To The FDA For Review
Can The Baby Have That?