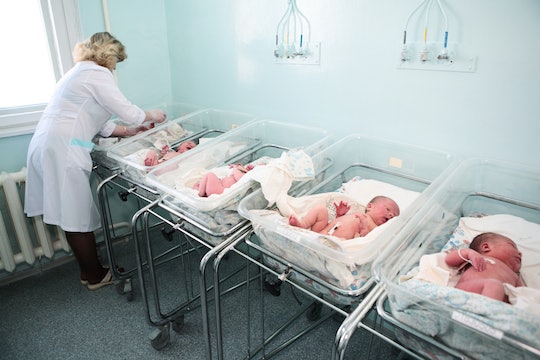 The One Thing TV (Unfortunately) Gets Right About Birth

The idea of newborns going home with the wrong family is nothing new. It's an old soap opera trope, and even recent shows like Switched At Birth examine the possibility of unknowingly raising someone else's baby. But do babies really get switched at the hospital? The possibility is chilling for any new parent.

Real-world statistics on babies who were switched at birth are difficult to find. This could (hopefully) mean that baby swaps are too rare to warrant any stats, although it's also possible that, once switched, some babies stay with the new family forever. Maybe it's a mistake no one ever notices or records.

Despite the lack of hard numbers, there are a few real-life instances of babies getting switched at the hospital, if only for a while. According to a 2016 article in The Washington Post, author Karin Tanabe's infant was given to another mom in the hospital. Well, for a moment. The nurses realized the mistake quickly, but not before the infant was given formula by the other mom. Although Tanabe's case worked out OK (aside from the anxiety it caused), there may be a health threat associated with accidentally feeding infants another woman's milk. In fact, parents should treat ingestion of another source of breast milk like any other accidental exposure to body fluids, according to the Centers for Disease Control and Prevention. Inquiring about HIV tests or other infectious diseases is crucial. Basically, even a few minutes with the wrong mom can put a baby at risk.

Thankfully, many hospitals now have practices to prevent these switches from occurring. Larger staffs, infant ID bracelets, and a general move away from hospital nurseries make sending your baby home with a stranger much less likely, according to HuffPo. If your baby is carefully identified, and the newborn is housed in your room around the clock, such nightmarish mix-ups are almost impossible.