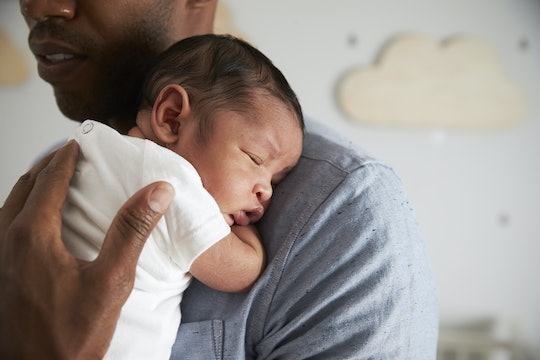 Here's How Babies Recognize Their Dad

It’s no secret that mothers have the advantage when bonding with their babies. After all, carrying a little person in your body for many months connects you in a truly unique way. Many studies believe that newborns are able to recognize their mother’s voice in utero. If you’re a breastfeeding mother, research suggests that your baby becomes familiar with your scent soon after birth. But, do babies recognize their dad? Dads may not have the same amount of contact with their babies during pregnancy and directly after delivery, but that certainly doesn’t lessen their bond. Experts suggest that babies may recognize their dads as early as their moms.

Doctors say babies begin to recognize sound when they’re in the womb, anywhere from 18 to 25 weeks gestation, according to Healthline, and noted that by the third trimester, babies can recognize your voice. According to a study published by the University of London, since babies hear their mother’s voice both as an ambient sound from outside and as a vibration through the body, they are more apt to recognize mom’s voice than dad’s. The study also mentions that babies do familiarize themselves with sound and speech pattern, and can soon recognize songs or stories that both mom and dad have sung or read.

As noted in a separate study by Queens University in Ontario, it is possible babies recognize both parents' voices. Speaking and singing to your baby in utero, and having your partner do the same, can increase baby’s ability to recognize your voices post-delivery, according to Parents.

Newborns also have very blurry eyesight, seeing only as far as eight to 12 inches away, according to Kids Health. This turns out to be about the distance from baby’s face to yours while you feed them, which makes it a terrific way for both mom and dad to bond with baby. You may notice that, as your baby's eyesight begins to improve, she reacts when seeing familiar faces.

Moms seem to have the upper hand when it comes to who baby will recognize first, but this does not negate the importance of dads and their relationships with their babies. Babies develop a special bond with their fathers, and taking time to foster that from pregnancy will only help to strengthen it over time.