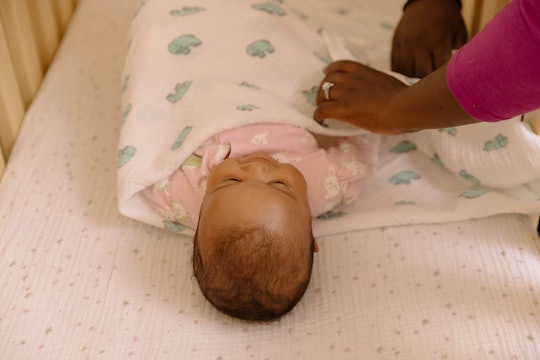 Experts Say If You Swaddle Your Baby, You Can Get More Shut-Eye For Yourself

Crazy as it sounds to humans who aren't fresh out of the oven, wrapping your newborn up like a little baby burrito is exactly what she needs for deep, restorative sleep. It's the reason swaddles sell like hotcakes and everyone touts the benefits of swaddling. But do babies sleep longer when swaddled? There's no way it can be comfortable, you think.

The truth is that babies love it. After all, life on on the outside takes getting used to after spending nine cozy months nestled inside a warm body listening to mom's heartbeat. In an interview with Romper, Princess Lock, a nurse practitioner and educator at Orlando's Winnie Palmer Hospital, says it's important to think of the first few months after birth as the baby's fourth trimester. Lock specializes in high risk obstetrics and gynecology, and she says that a good swaddle provides the comfort and relaxation a baby needs to get a decent rest.

"A lot of people don’t consider the fourth trimester. They’re like 'moms free, baby’s free,'" she says. "As the baby is transitioning to extra-uterine life, so is mom and [swaddling] helps with thermoregulations and reduction of stress. If you can simulate the womb, the baby feels the same comfort and sensation of being in the uterus."

Because babies don't have regular sleep cycles until about six months of age, it's important that the one to three hour stretches they get are quality. A good wrap with a finger's breadth of space between their bodies and the blanket suppresses babies' Moro reflex — when they extend their arms and legs when startled or feel that they're falling — to encourage REM cycle sleep, according to the Journal of Physiology. In a study conducted by the American Association of Pediatricians, newborns who were swaddled were found to be more sleep efficient and less prone to spontaneous awakening.

"The baby's reflexes are going to be less stimulated and the baby can focus on relaxation and feeling safe," Locks says. "They can get deeper sleep because they have the comfort of being swaddled."

Swaddling is also a useful tool against Sudden Infant Death Syndrome for that reason as well. Once you see the Moro reflex in action, you can be sorely tempted to put your baby on her stomach to sleep, which is a huge no-no. Infants have not developed the neck strength to lift or turn their heads and can easily suffocate in the mattress or bedding before they can roll over, reported the American Academy of Pediatrics. Their gag reflex, however, is well developed and babies will not choke on their backs.

"The baby’s gag reflex is there to help it keep from choking on their back," Locks says. "It takes 12 to 16 weeks for head strength, so the baby suffocates when it’s laying on its stomach."

The only real risk to swaddling is wrapping babies too tightly, which can result in hip dysplasia. According to the International Hip Dysplasia Institute, straightening the babies legs — which have been curled in a fetal position while in the womb — to a standing position can loosen joints and damage soft cartilage in the sockets. Their legs shouldn't be wrapped straight down or straight together, but the swaddle should instead allow for the baby's free movement from the hips down to allow their legs to spread apart and bend upwards.

Despite swaddling's sleep promoting qualities, Lock warns parents against expecting that it will encourage infants to sleep more than three hours at a time. It's a healthy sleep pattern for babies in the first few months of their life and is largely determined by mom's sleep patterns before birth. When I asked her about my own swaddle-demanding infants — who I figured were just terrible sleepers, despite being instantly soothed when wrapped — she says mom's disrupted sleep in the third trimester is what determines the healthy sleep snacks infants indulge in until 3 or 4 months of age.

"In your last trimester of pregnancy, I bet you didn’t sleep yourself," she says. "In truth, your kids may not have been really bad sleepers. They may have been following natural patterns. As the baby grows, that's when the baby will sleep longer periods of time."

Which is perfect, because swaddling isn't recommended past the first 2 months, according to the American Academy of Pediatricians. By then, you should be able to ditch the blanket and agonize over the next challenge: sleep training.