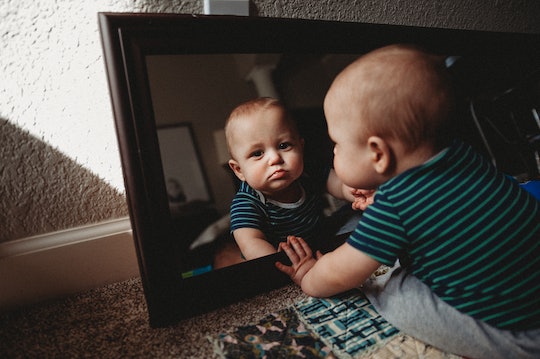 Infants spend a lot of their time in your arms or very close by, gazing at your face in amazement. As you sit there making goo-goo eyes and cooing gently at them with a smile on your face, you're probably wondering if they even understand that you're looking back at them. Do they recognize that a smile is different than a frown? Can they tell when you're looking at them excitedly and when you're looking at them with concern? Do babies really understand your facial expressions, or do they have no idea what's going on?

The answer to that question is more complicated than it seems, but one thing is for sure: babies love looking at faces more than anything else. Dr. Jennifer Jipson, professor of child development and psychology, tells Romper, "A natural preference for faces connects babies to the social world from their very first moments. This is adaptive because humans are a social species and we rely on others for survival and well-being." She says that infants are especially motivated to make social connections because their physical impact is limited by motor skills, so engaging with caregivers is done through facial expressions.

Jipson also points out that research shows that newborns can imitate facial expressions, and they show preference to certain faces. By 3 months of age, many newborns prefer female faces to male faces, and many babies prefer to look at same-race faces, she says.

Clinical psychologist Dr. Forrest Talley tells Romper, "Within the first hour after birth, newborns show a distinct preference for their mother’s face. So some pretty refined facial recognition is taking place in the infant early on, but it is difficult to say at this point how much they understand."

But their fascination with staring at faces doesn't necessarily mean they can understand facial expressions. Remember, newborns can't really see well until they're about 3 months old, and they can't see faces enough to make out different expressions. "Most researchers agree that by about 5 or 6 months of age, infants can discriminate between pictures of the same face portraying different emotional expressions," says Jipson.

Still, we don't know exactly when infants start to understand what your face is portraying. Talley points to a study on the subject done by Kate Lawrence and her colleagues. The study looked at children ages 6 to 16 years old, and showed them pictures of people making facial expressions consistent with various emotions. Researchers then noted how often each age group correctly identified the displayed emotion. "Sadness, anger and fear were recognized equally well across all age groups," says Talley. "But fear, disgust, and surprise were not as well recognized by the younger children when compared to older children."

Even if they aren't totally understanding your grimace or smile, Jipson points out that babies can pick up on emotional cues, like the tone of your voice. "Between 7 to 12 months of age, infants are particularly tuned in to expressions of fear, and look longer at faces that show fear than those that show happiness. This 'fear bias' coincides with infants’ developing ability to crawl and walk. Emotion perception is related to development in other domains."

Around 12 months, babies often use something called "social referencing" to figure things out, Jipson says. "For example, infants are cautious about engaging with an unfamiliar toy or person when their parent shows fear, and more likely to explore if their parent shows happiness."

So how can you, as a parent, teach them about facial expressions? "Parents teach their children from infancy how to understand facial expressions of emotion when they accurately match their own facial expressions with the other emotional cues they are expressing — tone of voice, content of speech, body language, behavior," says Talley. He encourages parents to "spend time each day actively engaging their son or daughter in ways wherein the verbal and non-verbal forms of communication are consistent." The good news is that you're probably doing this without even realizing it.