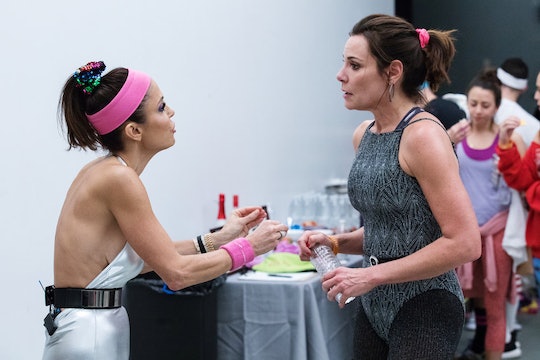 Luann Teases A Possible Reconciliation With Bethenny After 'RHONY'

Following an explosive argument during the Season 11 group trip to Miami, fans may be wondering if Bethenny and Luann made up after RHONY wrapped filming. The heated fight spiraled into something resembling a panic attack for poor B, but there's reason to be cautiously optimistic about the pair. Over the past week, Luann has made several red carpet appearances, and she hasn't been shy about talking to press regarding the shocking episode, which aired Wednesday, Jun. 12.

"It's something that happened, you know, over six months ago so it's always hard to see that again because we've gotten to a different place," she told Entertainment Tonight on Jun. 18, at a book signing for castmate Barbara Kavovit's new novel Heels of Steel. "It was tough. I felt really bad because I know there were a lot of things going on in there and it wasn't just about me. I think I handled it pretty well considering."

Luann's subtle hint about them being in "a different place" makes it sound like things have calmed down a bit between the two. Of course, fans will have to wait to find out exactly the extent of their make up, since Bethenny hasn't said much about the episode since it aired.

Luann went on to say that she didn't agree with a lot of Bethenny's criticisms, and unfortunately, it seems like she's leaning heavily on the excuse that the outburst was wholly a result of Bethenny's grief, and not partly due to her own behavior. Luann claimed that she stayed quiet during Bethenny's breakdown because she "felt like [it was best to] just let her vent."

On a more positive note, Luann did have some slightly more self-aware insights about how she was coming off during her early sober days. She told ET that taking care of herself took a lot of effort and energy and she just didn't have much left to give to her friends, which, at times, made her seem cold and unthoughtful. Said Luann:

I don't think people understand how hard it was to not drink on that trip because there was a lot of drinking going on in a big way…You know it may come off as being self-centered, but I really had to take care of me...It may get misconstrued as being a narcissist, but that's not me at all and people who know me a long time [know] that's not who I am.

Whether that level of accountability is enough to satisfy Bethenny remains to be seen.

For her part, Luann did say that she felt like Bethenny's outburst was a "true show of her love," because she didn't think her friend would have gotten so upset unless she deeply cared about her. That's a pretty generous way to look at it, considering that, in her rant, Bethenny accused Luann of nearly killing her friends by driving a boat while intoxicated, among other transgressions. My guess is, fans will get a better sense of where they really stand — and how much Luann is glossing over — when The Real Housewives of New York City reunion shows kick off on Jul 11.