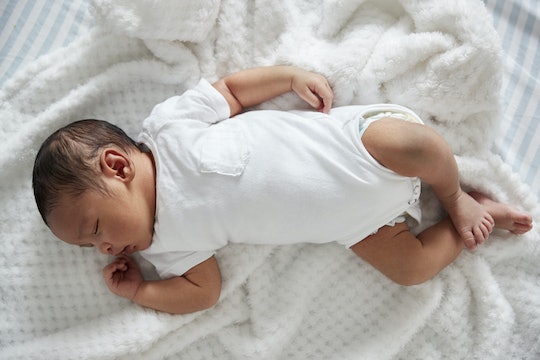 To circumcise or not to circumcise — that is the question. If you and your partner adamantly disagree on this topic, it can lead to some pretty heated debates, especially as your due date nears. And if neither party is willing to budge, some parents are left wondering, "Do you need both parent's permission to circumcise?" The answer isn't so clear cut (no pun intended!).

If you're pro-circumcision and your partner is fiercely against it —or vice versa — then what are your legal rights? Consent requirements vary from state to state, yet most states require the consent of only one parent, according to Legal Match. But even if only one parent's consent is legally required, that doesn't mean that a doctor will proceed with the procedure if the other parent is dragging their feet.

"For the most part, very few doctors will perform a circumcision if one parent objects to the procedure, usually out of fear of a lawsuit. You should make your objection very clear to all doctors involved, to prevent any misunderstandings (an attorney can also provide you with a "non-circumcision notification form" that will put the hospital on notice)", Legal Match explained. And if you're really concerned that your partner will go ahead and give the green light on the procedure anyway (even if you're adamantly against it), you can file an injunction to stop the procedure form happening.

Circumcision is such a hot-button issue that the American Academy of Pediatrics (AAP) formed a multidisciplinary task force in 2007 to evaluate the pros and cons of newborn male circumcision. They ruled that the "health benefits of newborn male circumcision outweigh the risks", citing the prevention of urinary tract infections, penile cancer, and transmission of some sexually transmitted infections, including HIV, according to an official policy statement put out by the AAP.

Yet, the cons for circumcision can be equally persuasive, including the fact that it inflicts pain on a newborn for a medically unnecessary procedure and that in rare cases, when the foreskin is cut too long or too short, can lead to poor healing and infection, according to Healthline. One argument claims that male circumcision is a form of genital mutilation, and if female genital mutilation is banned in the United States, so should the male equivalent.

Medical advice aside, there are many people who are pro-circumcision due to their cultural background and/or religious beliefs. And whether the father is cut or not, tends to be a deciding factor. "A World Health Organization study, published in 2007... found that 90 [percent] of circumcised fathers choose to circumcise their sons, compared with 23 [percent] of noncircumcised fathers," reported Forward.

In addition, it's interesting to note that while circumcision consent requirements vary from state to state, so do actual circumcision rates. A 2009 study showed that while 87 percent of baby boys were circumcised in West Virginia, only 12 percent were in Nevada, according to the same Forward article.

In general, the numbers suggest that the "con" camp may be winning — circumcision rate in the United States decreased from 90 percent in 1970 to 60 percent in 2000, according to a study published in the Indian Journal of Urology.

Wherever you stand on this topic, maybe it's to follow in daddy's footsteps, to follow the trend of the state (so your son isn't the anomaly among his peers), or to fulfill religious beliefs, if you want to avoid a prolonged legal battle, it's best to hash it out with your partner outside the courts if possible.

If you're still at a stalemate on this issue, my two cents is that the woman who births the child should have final say! Granted, I have two girls so what do I know.

More Like This
When It’s Safe To Bring Your Newborn To A Restaurant, According To A Pediatrician
Can You Burp A Baby Too Hard? A Pediatrician Shares Tips For Gassy Tummies
Is It Good For Babies To Be Exposed To Germs? It’s Complicated
The Best Toys For 3-Month-Olds