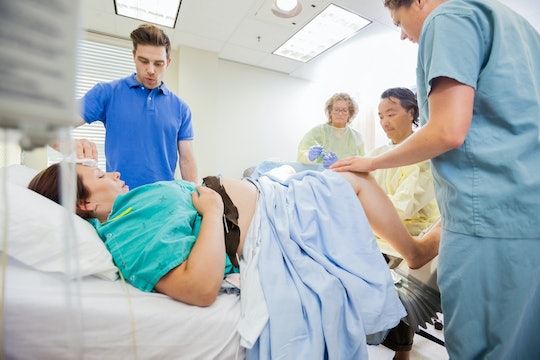 Do Breech Babies Have To Be Delivered By C-Section?

If you're in your third trimester and your baby hasn't turned, you're probably wondering do breech babies have to be delivered by C-section? The answer to this question is a bit controversial, so if you have concerns, it's best to review this topic with your doctor and birthing team STAT.

Fit Pregnancy reported that four percent of babies in the United States are vaginally delivered in the breech position, which doesn't add up to a whole lot of babies being born feet first. The same Fit Pregnancy article explained that the reason for these low numbers is based on a Dutch study published in ACTA Obstetricia et Gynecologica indicating that there are fewer risks for breech babies if they are delivered via C-section.

Basically, this study (which took place in The Netherlands) found that neonatal mortality increased tenfold in breech babies delivered vaginally compared to those delivered by an elective C-section. The study, known as the Term Breech Trial (TBT) is the only randomized study of its kind, and, conducted in 2000, is considered to be the "best conducted and most important study comparing breech vaginal delivery with elective C-section," according to the journal Science Based Medicine, which noted this fact in 2010.

The American College of Obstetrics and Gynecology also confirmed that elective C-section is the preferred form of delivery in a breech situation, mainly due to the fact that physicians in the United States are not well-trained on how to deliver a breech baby vaginally.

In the perviously mentions Fit Pregnancy article, Dr. Alison G. Cahill, chief of the division of maternal-fetal medicine at the Washington University in St. Louis School of Medicine, said that most doctors are instructed to tell women that they should plan on having an elective C-section if their baby hasn't turned by week 39. Cahill explained that there are risks associated with any type of unplanned surgery, and a C-section is no different. Therefore, to mitigate that risk, women elect for a C-section. Make sense?

However, not everyone believes that breech babies must be born by C-section. Many women opt for vaginal breech deliveries, though this is still an uncommon practice. Why? According to the aforementioned journal Science Based Medicine article approximately "35 percent of breech babies are in an unfavorable position for vaginal delivery, and others will exceed the weight criteria or have other contraindications." You might want ask your physician if he or she is trained in vaginal breech deliveries, and what the risks are, bearing in mind that every pregnancy is different. Even if you are hesitant about an elective C-section, (a misnomer if you feel like you don't want one) you do want your baby to be born healthy. So, be sure you have a doctor who can review all the information with you to make an informed decision about your delivery.