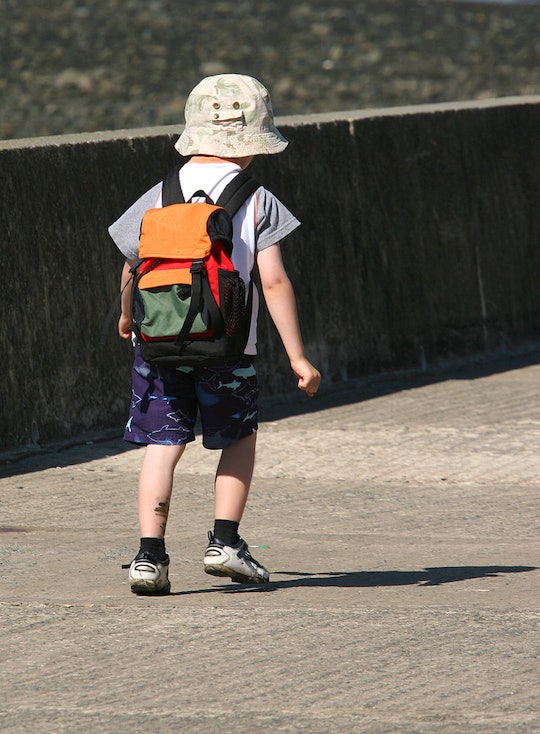 Bulletproof Backpacks Are Selling Like Hotcakes — But Can They Keep Kids Safe?

With the surge in school shootings, particularly the one in Parkland on February 14 that took 17 lives, parents are scrambling to find a way to keep their kids safe. Every day we send our kids to school and right now it feels really risky. After Sandy Hook, bulletproof backpacks with a Kevlar lining were introduced by BulletBlocker as a safeguard to protect children and their sales have surged after the Parkland incident. But how effective are bulletproof backpacks in keeping kids safe?

Sales of these specialty backpacks are on the rise, reported Huffington post. And while bulletproof backpacks might stop a handgun bullet, they're not designed to protect people from all types of ammunition. ABC Action News Tampa had Ryan Hart, a certified firearm instructor, test out the backpacks by putting them in front of a sand-filled target simulating a body. Hart showed that while the backpack might stop a handgun bullet, it will not stop AR-15 or other rifle bullets. Jeffrey Kimball, a former police officer and firearms instructor at Arms Room in Texas, performed a similar test and had the same results. Kimball told ABC Eyewitness News in Houston that, "for a student to have something rifle-resistant, the body armor would have to be metal plates, like something the military or a SWAT officer would wear."

Six of the last 10 mass shootings have involved AR-15s or similar assault weapons, according to ABC Action News Tampa as they were at the shootings at the schools in Parkland and Sandy Hook. In those situations, the backpacks are useless. In giving our children backpacks, we're also assuming that they will have the backpack either on them or near them, which isn't always the case, especially in elementary schools where backpacks are often kept in cubbies. In the case of a shooting, the only way for the backpack to protect the child is for the weapon to be a handgun and for the child to either be wearing it on their backs when shot there or holding it in front of themselves like a shield.

BulletBlocker sells their backpacks online and they range in price from $200 to $330. The company also sells inserts that you can put into pre-owned backpacks or three ring binders as well as a bulletproof tablet case. Michael Dorn, Executive Director of Save Havens, a non-profit school safety consulting company, told NBC News that the problem with these inventions is "they’re not practical from a cost-benefit standpoint." Dorn said, "We could cut the death rate in half in our schools with things like good student supervision and better drill processes."

With little control over the situation, it's natural for parents to want to believe there's something they can do or buy to keep their kids safe. After Sandy Hook, in addition to the backpacks, there were also bulletproof blankets being sold for about $1,000 each. The blankets were also promoted as protecting children from a natural disaster, like the tornado that hit Moore, Oklahoma and destroyed the school, with the Kevlar serving as a protective barrier against not only a bullet, but falling debris. They weren't as effective as people hoped, the cost was prohibitive, and the blankets are no longer available.

Everytown For Gun Safety In America did an analysis of school shootings and found, "Of shootings perpetrated by minors at primary and secondary schools and for which the source of the firearm was known, more than half of the kids obtained the gun at home — likely because an adult did not store it locked and unloaded." So maybe instead of sending them to school with armor, a better way to keep all the kids safe is to make sure that if you own a gun, it's locked up properly. School safety is an ongoing issue, with strong feelings on every side. Some parents are advocating for armed guards in schools and some feel strongly that more guns will not solve the problem.

Let them wear bulletproof vests, others might suggest. But even the vests worn by police officers wear will not protect you from a semi-automatic rifle bullet. To stop that type of ammunition, they would have to be made of the same armor that protects military soldiers and SWAT officers.

As desperate as we all are for the solution to this problem and for something that guarantees our children's safety in the case of a shooter, getting one of these backpacks can't hurt because you never know what type of weapon could be used in an attack.

More Like This
What Is RSV?
Can Elderberry Help Prevent Illness In Kids? Doctors Weigh In
Tips For Apple Picking With Kids
15 Weird-But-Genius Products For Breastfeeding Parents