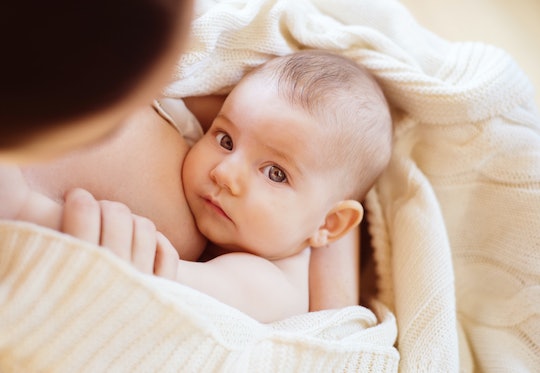 I don't know about you, but when I think "cabbage" I think "painful" and "gross." You know, like that terrible cabbage soup diet that involves eating a ridiculous amount of cabbage soup in a week with the hopes that the numbers on the scaled will "magically drop." Hard pass, my friends. But, to my surprise, cabbage isn't all bad news. In fact, there's a rumor floating around that it could actually be a breastfeeding mom's best friend. So, do cabbage leaves really help with engorgement?

The verdict, according to La Leche League, is that using cabbage leaves to help with engorgement might be worth a shot, but this method should be used with caution. There isn't wide scientific evidence to support the claim that cabbage leaves will relieve the painful side effects of engorgement, but there is considerable anecdotal evidence from decades of breastfeeding moms. La Leche League explains, writing: "One study reported the group using cabbage leaves experienced a slight reduction in perception of engorgement and exclusively breastfed longer (Roberts 1995b). A study comparing the use of chilled cabbage leaves to chilled gel packs found that pain was relieved within one to two hours with both treatments, but mothers preferred the cabbage treatment (Roberts et al. 1995a)."

Plus, cabbage leaves are typically shaped to cup your breasts, and are relatively inexpensive, so they might just be worth a try.

KellyMom, a parenting and breastfeeding advice site, explains that engorgement typically happens to a mother's breasts two to five days after she gives birth. "It is normal for your breasts to become larger and feel heavy, warmer and uncomfortable when your milk increases in quantity two to five days after birth. This rarely lasts more than 24 hours," reports KellyMom. However, engorgement can affect how your baby is able to breastfeed because it is difficult for a newborn baby to latch onto a breast that is so full and hard. KellyMom also cites cabbage as a potential alternative treatment for engorgement, writing, "Applying cabbage leaf compresses to the breast can be helpful for moderate to severe engorgement. There is little research on this treatment thus far, but there is some evidence that cabbage may work more quickly than ice packs or other treatments, and moms tend to prefer cabbage to ice packs." The site goes on to say breastfeeding moms can use cabbage leaves for engorgement, extreme cases of oversupply when the usual methods used to decrease milk supply aren't working, during weaning, and to reduce swelling.

If you're looking to use cabbage leaves to relieve engorgement, here's how to do it, according to La Leche League. The site's instructions reads as follows:

"The clean, inner leaves of a head of green cabbage can be applied between feedings for several feedings. The leaves should be changed at least every two hours or when they wilt. Mothers should know that there may be some smell of cooked cabbage if they choose this treatment method."

You shouldn't use cabbage leaves indefinitely, though, as La Leche League warns mothers that the overuse of cabbage leaves can lead to a reduction in milk supply, according to some reports. The site goes on to suggest that cabbage leaves only be used until the swelling goes down. If you notice a skin rash or other signs of an allergy, you should discontinue use of the cabbage leaves immediately.

If your baby is having a hard time latching due to engorgement, KellyMom has a few suggestions for treating engorgement to make breastfeeding easier or possible, including using a cool compresses for up to 20 minutes before nursing. Using a moist warm compress for a few minutes before nursing may help the milk begin to flow, too, and can also relieve the pressure associated with engorgement. Likewise, hand expressing a little milk before attempting to breastfeed can help your baby latch.

KellyMom also addresses engorgement prevention, suggesting breastfeeding moms nurse "early and often, at least 10 times per 24 hours," and breastfeed on demand. In addition, KellyMom suggests you, "Allow baby to finish the first breast before offering the other side. Switch sides when baby pulls off or falls asleep. Don’t limit baby’s time at the breast." If your baby is still not nursing well and you fear engorgement might be the result, it's suggested that you express your milk, via either a breast pump or hand expression, frequently to maintain your milk supply and minimize engorgement. And of course, and as always, if you have any severe pain or lingering questions or concerns, contact your health care provider.