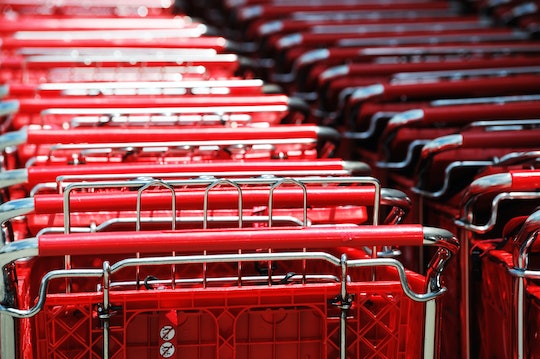 It Looks Easy, But Your Car Seat Is *Not* Meant To Fit On Top Of Your Grocery Cart

Before I had kids, I made note of the moms at the grocery store zipping through aisles with an infant car seat on top of the cart. They looked so confident in the setup that I assumed the car seat and the shopping cart were made to attach to one another; like the two companies had somehow brainstormed together to make life easier for moms. Once I had my first baby and tried the same thing, I was frustrated to find that I could never make it secure. So, which is it: Do car seats fit on grocery carts, or has my whole life been a lie?

Sadly, it's the latter. One quick look at any car seat manual will bring you to the words, "Never place carrier on the top of a shopping cart," or something to that effect. Contrary to all of my previously held assumptions, infant car seats were actually never made to go in that spot. The only exception was once the Baby Trend Flex-Loc, according to the Carseat Blog, but the updated manual no longer allows for it.

If the product's own manual says not to do it, that should be an automatic no-go.

But is that warning unsubstantiated? Couldn't it just be the car seat company's need to avoid liability, with no basis in real risk? Not according to the findings of The United States Consumer Product Safety Commission (CPSC). In 2013, the CPSC published a document of recorded accidents involving children under the age of 5 and shopping carts between the years 2008 and 2012. During this four-year period, there were three instances of a baby secured in a car seat falling out of a shopping cart: Of those three, one resulted in hospitalization and one ended in death.

The fatality noted by the CPSC's findings was that of 3-month-old James Anderson Berg in Atlanta. As James' mother walked to her car with a Kroger employee, "The baby was secured to a car seat that had been removed from its vehicle base and placed in the area of the cart near the handlebar where an older child would usually sit," according to a news report by Daily Mail. When the cart went over a speed bump, the car seat toppled out with James in it. He was taken to the hospital but declared dead five hours later.

Sure, that's only one tragic death in a four-year-period; but one is enough for me. Coming up with an alternative way to grocery shop with my 4-month-old son might be less convenient, but it's worth it if it could save his life.

One alternative is to put the infant car seat inside the large area of the shopping cart, where your groceries go, so that your baby is in no danger of falling out. You can still fit quite a bit of products around the seat, and don't forget about the shelf underneath that is perfect for transporting larger items like toilet paper, paper towels, diapers, and gallons of milk.

If you have a big family or an empty kitchen, you might find yourself needing the entire cart. In that case, wearing your baby in a wrap or baby carrier is the best choice to get you through your shopping. Consider keeping one in the trunk of your car so you'll be sure to always have it with you — there's no need to create one more thing to keep up with on your grocery run. After all, if you're shopping with a baby in tow in the first place, odds are your brain is already pretty full.