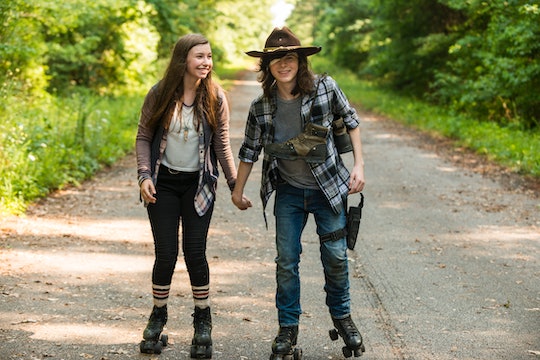 Do Carl & Enid Get Together In 'The Walking Dead' Comics? Carl Has Another Love Interest

On The Walking Dead, Carl's life has not been great since the zombie apocalypse began. Sure, he picked up some neat survival skills and a nice hat, but he also had to shoot his mother, watch people he cared about get their skulls bashed in, and deal with losing an eye. It hasn't been a rollercoaster ride of fun for poor Carl, but his burgeoning romance with Enid has provided him a few moments of not-dire-horror in these trying times. But is their romance an invention of the show or does it have a basis in the comics that inspired it all? Do Carl and Enid get together in The Walking Dead comics?

Technically they don't, because Enid is not a character who exists in the comics. She was made up entirely for the show. However, that doesn't mean her romance with Carl is entirely without comic influence. In fact, Enid seems to take after a character from the comics who died a long time ago on the show: Carol's daughter Sophia. Carl and Sophia were still pretty young in the comics when this spark occurred, so their relationship was fairly innocent throughout, even with its romantic overtones. But they did have a very close friendship. Carl was incredibly protective of Sophia too and almost beat two boys to death when he caught them bullying her.

In the comics, Carol committed suicide and Sophia ended up being taken in by Maggie and Glenn, treating them as her adoptive parents. While the situation wasn't quite the same, Enid definitely had a special connection to both Glenn and Maggie, even traveling all the way to Hilltop so she could stay with Maggie again following Glenn's death. That seems to be where the inspiration from Sophia comes in, though the fact that Enid and Carl are both much older gives things a different spin.

However, Carl does have another love interest in the comics, a girl named Lydia. Lydia is the daughter of the Whisperers' leader Alpha, an enemy group that is currently causing trouble with Alexandria in the comics. Lydia started off as a prisoner in Hilltop after taking part in a Whisperer attack, though she later thought of the community as her home. She and Carl formed a strange, close, but not very healthy relationship. Though they found comfort in each other, they were both dealing with some pretty heavy trauma, Lydia especially. Her life among the Whisperers was cruel; she was abused and sexually assaulted multiple times in an effort to "toughen her up." She and Carl ended up sleeping together even though at the time he was only thirteen and she was sixteen.