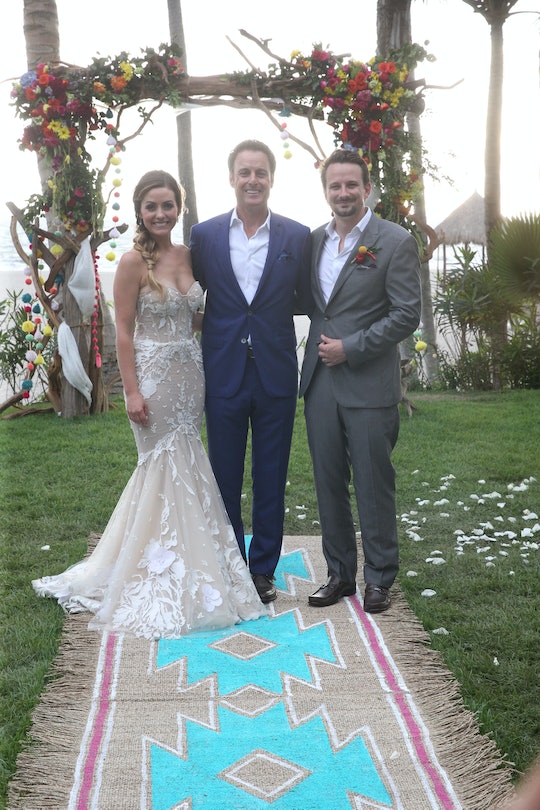 Do Carly & Evan Get Married On 'Paradise'?

In case viewers didn't know, filming for Bachelor in Paradise usually takes place in a matter of three weeks. It seems unbelievable, as some couples get engaged at the end, but it's true. This means that people fall in love – or at least think they're falling in love in that amount of time. Naturally, many of these couples end up breaking up. Some, however, have beaten the odds, including Carly and Evan. Carly didn't even like Evan at the beginning, and they got hitched! But do Carly and Evan get married on Bachelor in Paradise? They actually fell in love last year.

For those who didn't see Carly and Evan's love unfold in real time last year, it was honestly...interesting to see. In the beginning of the season, the two were paired off with other contestants. Carly and Evan then tried dating, but Carly was not feeling Evan. They shared what was possibly the most awkward kiss ever filmed, and I (and all of Bachelor Nation) was sure that they were over. Despite that, though, Carly made a 180 on her feelings and they quickly fell for each other. On the season finale, the couple became engaged. Now, Bachelor veterans know that just because this happens doesn't mean they'll actually get married. Honestly, I thought their love would fizzle.

Wow, was I wrong. This is not totally unheard of. Jade and Tanner also tied the knot after getting together in Paradise, so this is not uncharted territory. It seems that Carly and Evan are truly MFEO, because not only did they stay together – but they actually did get married. The two wed in June at the Vidanta Nuevo Vallarta resort in Mexico. Not only was it a Bachelor wedding, but it was filmed with the intention of being aired on ABC. Will Carly and Evan get married on Bachelor in Paradise, the same show they fell in love?

As it turns out, yes! Despite the Paradise scandal and interrupted production, the wedding will air on the show. The first episode of the season appears to focus on the pool incident between Corinne and DeMario, but Evan and Carly's episode will air on Tuesday night. Thankfully, Bachelor Nation won't have to wait too long to see their story come full-circle.