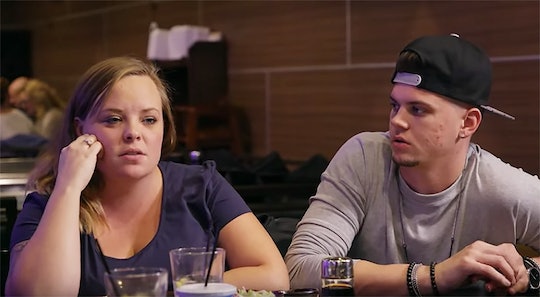 In case you missed the happy news, Teen Mom OG stars Catelynn and Tyler Baltierra are expecting their third child together. Considering this is an exciting time, some fans are jumping the gun by bringing up the topic of whether Catelynn and Tyler want more kids after this pregnancy.

Catelynn and Tyler have two kids together — Carly, a daughter they placed up for adoption in 2009, and Nova, 3. The new baby — another girl named Tezlee — is expected to arrive in March.

The third pregnancy is especially heartwarming because Catelynn suffered a miscarriage prior to conceiving Tezlee.

“It was a huge shock at first. We were not planning it, especially after the miscarriage and how I went downhill with my mental illness,” Catelynn said about the pregnancy, according to People. “We were going to wait a really long time. We were using protection and everything and still got pregnant. This baby just wanted to be here. It was very unexpected.”

Shortly after the couple announced their pregnancy in September, they threw a sex reveal party with close friends and family. Upon learning baby number three is a girl, Catelynn said to Tyler, according to Entertainment Tonight: "I don’t want another girl! Girls are so sassy. Do you only make girls, what’s your problem?”

Given Catelynn's desire for a boy, it's reasonable fans want to know whether the couple will try for another baby down the line.

“We definitely want to have a boy, but if God only wants us to have girls, then that’s just what it is,” Catelynn said, according to Us Weekly. “It will be a houseful of ALL girls! Poor Tyler!”

Yep, it sounds like the parents are open to trying for a boy in the future.

Catelynn also mentioned her plans for a large family, stating, according to People: "I want to have a big family and have a lot of kids, but it’s scary. It’s definitely scary.”

As for why the prospect of more kids is scary? Catelynn has struggled with bad bouts of postpartum depression in the past.

The good news is Catelynn has an awesome support system in Tyler. Even though the two are going through a trial separation at the moment, they remain committed and connected co-parents.

“He was AMAZING and supported me through the whole time! I also knew I had to go so I wouldn’t commit SUICIDE!" Catelynn said on Instagram about Tyler's love and support, according to Us Weekly. "I am supporting what he wants now! We love each other and ALWAYS WILL!”

Going back to the whole trying for a boy thing, I'm pretty positive Tyler and Catelynn would be cool with another girl. Case in point: the two love Nova to pieces.

"I love being a father," Tyler a captioned an Instagram shot with Nova.

"My babe, my heart," Catelynn commented on an adorable snap of the little girl.

Although it remains to be seen how many kids Tyler and Catelynn will have one day, it's obvious they love parenthood.