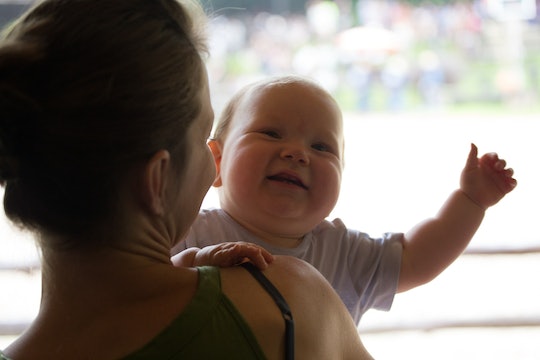 What You Need To Know About Styling Your Hair Postpartum

When I was breastfeeding, I had really long hair. In fact, it was the perfect length for tiny hands to snag a handful and yank like the rope climb at gym. I put what little hair I had left in a bun, but do certain hairstyles make postpartum hair loss worse?

More Like This
9 Things Not To Say To A Pregnant Woman On Mother’s Day
Lightning Crotch Can Actually Tell You These 7 Things About Your Pregnancy
Could Increased Anxiety Mean You'll Go Into Labor Soon? Experts Explain
16 Cute Maternity Dresses For Spring

When I gave birth to my oldest child, I had the most luxurious mane I'd ever had, in spite of the horrific pregnancy-related anemia I experienced. I looked like a shampoo commercial the day my husband drove me through Manhattan as I hurled epithets at him while my body tried to rid itself of its boarder. My face was red and streaked, but my hair was fabulous.

About two weeks after giving birth, I noticed that my hairbrush was starting to resemble a tiny animal. My ponytail was smaller, thinner. Overall, it was less luxurious crown and more a rusted prom tiara. A few weeks later at my OB-GYN appointment, while my doctor was inspecting my terribly injured lady-flower, I remember saying, "What is up with my hair?" I think at first I confused her, because she was face to vag with my down-there hair, so I corrected myself. "Every time I brush my hair, more falls out. I can see skin when I pull it up too tightly."

My doctor — way less-confused than moments prior — went on to explain to me that many women experience postpartum hair loss. It's actually a type of telogen effluvium, which, according to the American Academy of Dermatology, is a temporary hair loss condition. It is a type of non-scarring alopecia, noted a study in American Family Physician, that arises during the rush of hormonal activity after having a baby and is a temporary increase of the number of hairs in the telogen or rest cycle of the growth pattern. This was very enlightening, but not very comforting. She said that it would go back to normal eventually. (She failed to mention that this would include a period of time wherein I had sprouts of baby hair all over my head that came in as a different texture and made me resemble one of those doll-heads kids use to play hairdresser with, but inevitably just chop up.)

I needed to know if certain hairstyles make postpartum hair loss worse, and, if so, what were my options? There is a lot of anecdotal evidence out there. Anyone who has worked in theatre has heard of ballerina baldness, which is a form of traction alopecia, according to The Independent, that occurs with the repeated action of tying and wearing one's hair into a very tight bun.

So as it turns out, yes, there are certain hairstyles that make postpartum hair loss worse. Not only can repeatedly tying your hair back in a tight bun or ponytail make your postpartum hair loss worse, it can speed up the process of losing the hair, according to an article in The Dermatologist. (Think of all of those hairs wrapped around the hair tie when you take it out.) Anything that causes traction on the scalp, including locs or braids, can pull at the hair more, exacerbating the issue.

The only way to avoid speeding it up or making it worse is to treat your hair like it's made of spun gold and fairy dust. Long minutes of gentle conditioning and slow detangling, followed by air drying and — no one has time for that. What women can do, according to the hair loss specialists at The Belgravia Centre, is to try to wear it loose as much as possible. Be nice to your hair when you can be. Try not to tie it so tightly, or brush it like it did something to you, according to the experts at The Hair Sentinel, a beauty website dedicated to testing all things hair loss. But most importantly, remember, this, much like most things in life, is a phase. You made a person from scratch. Now you'll just need to make some new hair. Way easier.