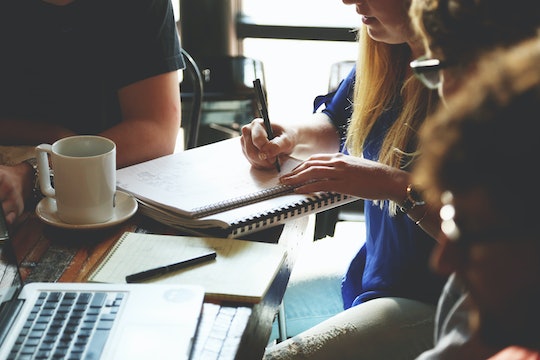 Do Colleges Offer Daycare For Students With Kids?

While movies and television would have us all believe that college campuses are exclusively filled with 18 to 20-somethings, the reality is that people from all walks of life, and all stages of life, are seeking college degrees. For those who have kids, the decision to go back to school can be a major logistical one. Do colleges offer daycare for students who are parents? A few in the United States do — but more definitely should.

The demographics of college students have been rapidly changing over the last decade. According to the National Center for Education Statistics, in 2014 there were 8.2 million students over the age of 25 enrolled in college. People who fall into this category have often been referred to as being "non-traditional" students, but that paradigm could be changing.

Many adults who want to either return to college, or start a degree program later, have already started to build a life that might include a career, a partner, a home, and a family. For those who start college straight out of high school, or shortly thereafter, the lack of responsibility theoretically makes it easier to focus on the tasks at hand. But, as neuroscience has been saying for years, there's a lot of evidence that a young person's brain isn't even fully developed until they're in their mid-20s.

Of course, the challenges of trying to balance school with demands of work and home are very real for many people, regardless of age. Those who become parents before they finish high school, or while they're in college, are less likely to end up with college degrees than their peers without kids. One reason for this is lack of support — whether it be social, financial, or institutional. Parents of any age have a lot to balance, and depending on how old their children are, childcare can be one of their biggest worries.

There are some colleges that are stepping up to help support students who have childcare needs which, if unmet, would keep them from being able to attend classes. In California, 84 percent of the state's community colleges offer on-campus childcare. One reason that community colleges are more likely than private universities to offer childcare is probably because of their demographic: of the 4 million women attending community colleges in the U.S., 1 million of them are mothers, according to the American Association of University Women.

Nationwide, 3.9 million student-parents are enrolled in college, but the number of colleges and universities offering childcare just doesn't match up with the need. In fact, statistics from the Institute for Women's Policy Research show that only 7 to 9 percent of private, four-year colleges in the U.S. have childcare programs for students. The numbers for public colleges are better — around 49 percent according to that same study — but many aren't able to meed the demand of students, and can be unreliable.

A handful of colleges actually go a step further and provide housing for single parents, usually mothers, and give priority on-campus housing to students who have children. Saint Paul's College in Virginia offers mentorship for student parents, especially those who are single parents, to help them navigate both their education and the demands of parenthood. While amazing programs like these are worthy of praise, they are unfortunately few and far between.

But, according to Best Colleges, there are at least 40 colleges and universities in the U.S. that have committed themselves to developing robust, comprehensive, and accessible support programs for parents, which includes childcare. And they aren't all community colleges: among the ranks is the University of Massachusetts at Amherst, in addition to childcare and on-call babysitters, the school also offers "blended" on campus and online programs, which can be beneficial to students who work or have kids at home.

Research has shown that if barriers to education such as childcare are lifted, the educational outcomes for student parents are much better. But even better? Research also shows that the children served by a college's childcare programs while their parents finish school are more likely to end up going to college themselves. That means that student parents aren't just investing in their own future, but their kids' futures, too.