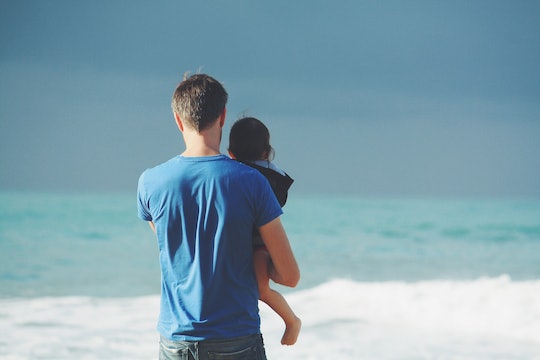 It's True: Dads Can Get Postpartum Depression Too

You would think that postpartum depression would be limited to the human that literally parted ways with the baby growing inside of them — but as it turns out, dads can get symptoms of postpartum depression, too. A paper published in JAMA Psychiatry on Wednesday found that a small percentage of new fathers experience increased levels of depression after their children are born. The study, which was carried out in New Zealand and surveyed 3,523 new fathers, found that about 4.3 percent of the dads interviewed had higher levels of depression around nine months after their children were born. Another 2.3 percent experienced symptoms of depression during their partners' third trimester, as well.

"Pregnancy and childbirth may be high-risk periods for male depression," the study's authors wrote in the paper. "Yet, interest in perinatal depression has focused on women despite policies to improve the sex balance in research."

While researchers have been aware of mothers' postpartum depression and the hormonal changes that can kickstart it for a while now, fewer scientists have focused on fathers' experiences. According to CNN, dads are more likely to experience symptoms of depression if they are under stress or if their health is suffering — and those symptoms can surface both before and after their child's birth.

"Expectant and new fathers also experience biological and ecological stressors, including changes to brain circuits, structure, and hormones, that can increase their risk of depression symptoms," the study's authors wrote. "Thus, some of the biological mechanisms underlying perinatal depression may increase the risk in both parents."

Another study, which looked at 622 Canadian fathers, found that over 13 percent had higher levels of depressive symptoms during their partners' third trimesters. Similar to the New Zealand study, the Quebec researchers found that men experiencing stress were more likely to experience depressive symptoms during their partners' pregnancies — but they also found that factors like sleep quality and levels of social support played a role, as well.

Despite the increased risk of depression for fathers both before and after their child's birth, many dads aren't screened or educated about depression, and that's something that needs to change. "Given that paternal depression can have direct or indirect effects on children, it is important to recognize and treat symptoms among fathers early," the study's authors wrote. "The first step in doing that is arguably increasing awareness among fathers about increased risks."

Hopefully, the increase in research in paternal depression means we'll see health care policies change soon to reflect the risks — but in the meantime, it's important for dads to be aware of paternal depression, and for them to seek out the same support that moms do.