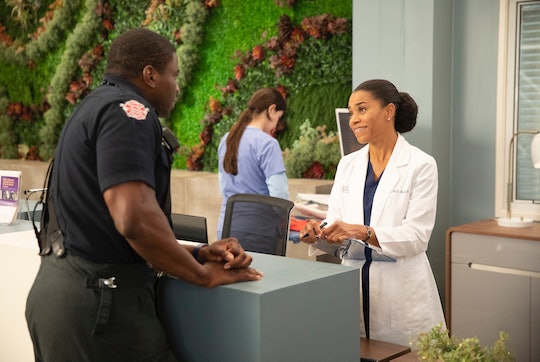 Season 15 of Grey's Anatomy just kicked off, and already, one of last season's favorite 'ships is heading toward rough waters. After Maggie and Jackson finally consummated their will-they-or-won't-they flirtation, Jackson promptly peaced out three episodes into the season following a near-death experience and subsequent crisis of faith. Lucky for Maggie, there's an upcoming crossover romance with her name on it. Fans tuning in are dying to know: do Dean and Maggie get together after the crossover episode of Grey's Anatomy and Station 19 ? Based on a sneak peek of the episode, he definitely asks her out. But it doesn't go very well on the first try.

Then again, this is Maggie Pierce (and Grey's Anatomy) we're talking about. She's notoriously awkward with relationships. Most of this she chalks up to the fact that she skipped several grades, which always left her the youngest and most socially inexperienced person in her cohort. But she's managed to spark a few flames at Grey Sloane Memorial, and Dean is the latest guy to give it a shot with her. It isn't really clear where Maggie and Jackson stand right now. Their relationship was new, but serious, and the couple's recent near-death experience — DeLuca knocked them out of the path of a speeding car — left Jackson in crisis.

He wound up running away to clear his head (To where? Who knows! Until when? Who knows!) and let Maggie know via voicemail which is only one step above a post-it note abandonment, as far as I'm concerned. He let the rest of the hospital know in an internal email, which meant that Maggie learned her boyfriend was gone from her co-workers before listening to the message. The whole thing has left her seriously doubting the relationship. But that doesn't exactly mean she's ready to let Dean swoop in and seduce her.

In their first, very awkward conversation, he does his best to turn on the charm but poor Maggie winds up nervously laughing in his face when he asks her out because, if you remember, she also happens to have an ex-fiancé named Dean. "This is going great," Dean deadpans.

Dean, played by Okieriete Onaodowan, is one of the firefighters from the Station 19 crew, which is the new Grey's Anatomy spinoff series helmed by Jason George. It follows Ben Warren on his transition from surgical intern to firefighter, and this week's crossover marks Dean's first appearance on Grey's.

In an interview with TV Guide, showrunner Krista Vernoff reminds fans that all is not necessarily doomed between Maggie and Jackson:

These are grown-up people. These are not 21-year-olds who propose before they've ever said I love you. It's not about whether or not she loves him. He is not proposing from a place of grounded health...They're still in early stages. They just started dating in the final quarter of last season. It's Grey's Anatomy, so relationships in the early [stages] tend to struggle a little. That doesn't mean that there isn't love there.