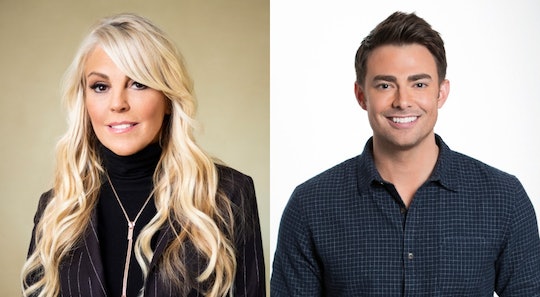 If you haven’t heard the news, the second season of Celebrity Big Brother is nigh, and there are some really intriguing cast members this time around. Among them are Dina Lohan, who is of course mom to actress Lindsay Lohan, and Jonathan Bennett, who is still best known for starring as Aaron Samuels in Mean Girls nearly 15 years ago. Clearly, there’s an obvious connection there, so I started to wonder if Dina Lohan and Jonathan Bennett know each other. It would certainly change the game in the house.

A little — OK, a lot — of social media digging hasn’t turned up any definitive proof that the two are acquainted prior to the show’s airing. Not that there would have been an old pic of them floating around somewhere, but if there was, it could have been scrubbed on purpose: The producers of the show take care to make sure that the contestants aren’t revealed to the public any earlier than they want them to, and this includes not telling the others who they’ll be living with. And since everyone on the show comes from different walks of life, such a notable surprise was probably kept under lock and key as much as possible.

What’s even more interesting is that this old link between the two isn’t exactly old these days. Just last week, Aaron Samuels and Cady Heron — I mean, Bennett and the younger Lohan — were reunited on screen for the aftershow of her own new reality TV venture, Lindsay Lohan’s Beach Club.

On the day this image was shared, Jan. 8, the Celebrity Big Brother Season 2 cast list had not yet been revealed. So if the show is as “real” as it claims it is, Bennett had no idea that he’s about to be locked in a house with his former co-star's mom for weeks. I do know that the actress knew about her mom’s casting beforehand, as per an interview with ET Online wherein Dina said that her daughter helped her pack for her stint, and also promoted the idea of a Mean Girls 2 movie.

I’ll be honest: I don’t know what to think. I’m skeptical of all reality TV shows being “real” in whatever way they may say they are, so I feel like Bennett ending up on Lindsay Lohan’s new show right now isn’t a coincidence. Then again, it is the era of “thank u, next,” so maybe everything is just coming up Mean Girls right now.

But forgetting about me, many others have a lot of opinions about the suspect casting:

On a more positive note, at least we know Bennett and Lohan will have something to talk about when breaking ice.

If Bennett's Celebrity Big Brother interviews are to be believed, he's going to come out on top. And he's not the only one who thinks so:

If Bennett's gonna win the game, he's going to have to team up with someone, and some think that Lohan is the obvious choice.

I mean, how can you not milk our generation's love of this film?

Whether they've known each other for years or are just awkwardly meeting, it's guaranteed that some kind of drama will go down with Bennett and Lohan. It's anyone's guess if it's positive or negative.