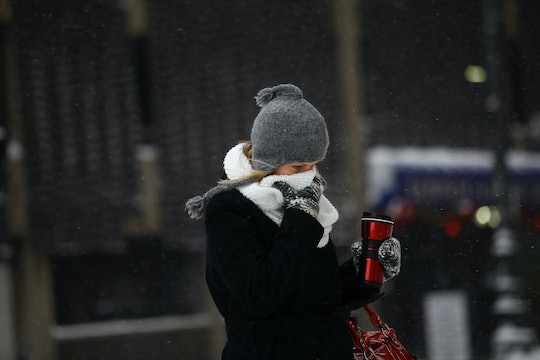 Where I grew up, there was a lot of mythology about the weather. After all, in Northeast Ohio it could easily be below zero on Monday, and 65 degrees on Wednesday. The old joke is, "Don't like the weather in Ohio? Wait five minutes, it'll change." Along with those weather swings would be a bunch of grandmas warning that the huge change was sure to make us all sick. As a kid, I took this as gospel. As an adult, I question the veracity of the claim. What's true? Do drastic temperature changes make you sick, or is that just an old wives' tale?

It turns out that there is a grain of truth in this old wives' tale, even if it's buried in bad wording. Vikash Modi, M.D., a family medicine physician at Piedmont Healthcare, wrote on their website that “changes in weather are basically challenges to our immune system and to our musculoskeletal system." We are creatures whose bodies enjoy homeostasis, and when that's ripped from us by the angry whims of nature, things can go awry. In fact, they can go downright haywire. Dr Modi continued, "Unfortunately, sometimes our bodies have a difficult time adjusting, which can trigger an illness.”

Every year I get the same cold. It's one part bronchitis, one part miserable face pain, and 16 parts whining while Netflixing. (It also apparently affects my math.) It happens just as the weather shifts from "so cold my fake eyelashes are freezing to my real ones" to "I guess I'll wear a sundress today." Right now in New York City, it was over 60 degrees last week, and today it's 7 degrees with a windchill of -15. On Monday, it's going to be 45 and sunny. That means on Tuesday, you will probably find me nursing a hot toddy on my sofa with my good friends Ron Swanson from Parks and Recreation and Paul Hollywood from The Great British Baking Show.

Ray Casciari, a pulmonologist at St. Joseph Hospital in Orange, California, told The Atlantic that it's not just the change in temperature that causes a throat to be sore, but also the quality of the air in the atmosphere. Cold, dry air isn't great for your health. "Your eyes tend to dry out, the mucous membranes in your nose dry out, and your lungs dry out, and you’re therefore much more susceptible to bacteria and viruses," he said. During a huge swing, this happens more quickly, so all of those problems feel exacerbated.

Apparently my tendency to huddle in my blanket fort with my sippy cup of cabernet during the winter might also have something to do with my yearly cold. Alexandra Sowa, an internist at New York-Presbyterian Weill Cornell Medicine, told The Washington Post that “people are relegated to the indoors, where there tends to be dry heat and poor ventilation. Both of these have been postulated to increase disease transmission and susceptibility.” That lack of ventilation makes your home, your office, and the school a veritable petri dish of germs and viruses, just waiting to pounce.

This is one of the rare old wives' tales that is actually correct — although the reasons aren't exactly perfect. Sometimes those old wives know way more than the rest of us, and we should step aside and learn from their wisdom. Or, in this case, stay with the moist air and make sure you have access to good ventilation. Otherwise it's just you, your bottle of Robitussin, heated blanket, and a whole lot of television. Which, apart from the cough syrup, actually sounds quite nice.