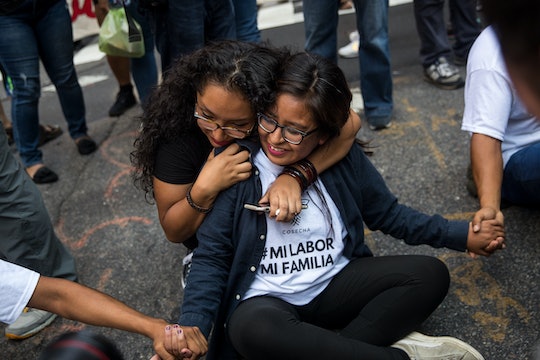 On Tuesday, President Donald Trump and his administration officially announced that DACA — also known as the Deferred Action for Childhood Arrivals program — is ending. As part of a statement about ending the program, Trump said that we have to ask what is "fair" to ask of taxpayers in the United States when it comes to undocumented individuals and the immigration system as a whole. But this conveniently bypasses the fact that DREAMers — the some 800,000 individuals who are protected by DACA — may be among those taxpayers. Because the fact is, undocumented individuals and DREAMers pay taxes. In fact, they contribute billions of dollars in state and local taxes, according to numerous sources.

The decades-long failure of Washington, D.C. to enforce federal immigration law has had both predictable and tragic consequences: lower wages and higher unemployment for American workers, substantial burdens on local schools and hospitals, the illicit entry of dangerous drugs and criminal cartels, and many billions of dollars a year in costs paid for by U.S. taxpayers.

But, again, those immigrants are taxpayers. And many would argue that ending DACA isn't fair to them at all.

Let's take a look at the numbers: Undocumented immigrants contribute to state and local taxes to the tune of an estimated $11.6 billion a year, collectively, according to a 2016 study by the Institute on Taxation and Economic Policy. The institute noted that undocumented immigrants pay state and local taxes, and sales and excise taxes for goods and services such as utilities, clothing, and gasoline. That alone makes them part of the group of "taxpayers" Trump is referring to.

The institute also reported that granting temporary relief to more undocumented individuals via DACA and the Deferred Action for Parents of Americans and Lawful Permanent Residents (DAPA) program would lead to a boost in their current state and local tax contributions. That implies that contributions are already being made by these individuals, and that strengthening, not doing away with DACA, would be a benefit to the tax base and to American taxpayers.

In March, a DACA recipient, Belén Sisa, posted a photo of herself holding up her tax returns on Facebook, according to CNN. It went viral, and sparked conversation about what DREAMers contribute to the country. In the post, Sisa said:

MYTH BUSTER: I, an undocumented immigrant, just filed my taxes and PAID $300 to the state of Arizona. I cannot receive financial aid from the state or federal government for school, I cannot benefit from unemployment, a reduced healthcare plan, or a retirement fund.

Some people claimed Sisa was lying, but her story isn't the only one of its kind. The organization United We Dream — the largest immigrant youth-led organization in the United States — has a page on its website dedicated to helping DREAMers file their taxes. Why would such a thing even be necessary if DACA recipients did no such thing?

And the fact is, the Internal Revenue Service has actually made it easier for workers who don't have a social security number to pay taxes, according to The Atlantic. That would include many undocumented workers. Workers who are paid in cash can still pay their taxes with an Individual Tax Identification Number (ITIN), and file a return just like any other taxpayer, The Atlantic reported.

So yes, DREAMers do pay taxes. As do many other undocumented individuals. They have for years. And at the very least, taking away the protections that DACA offers DREAMers could negatively impact the financial contributions they make to this country — not to mention everything else they have to offer us.